Mystery Jets "Serotonin" at No. 2 on Reverberations Countdown!

At No. 2 - A pop masterpiece by the Mystery Jets.

I welcome all comments, criticisms, questions and dialog in general. 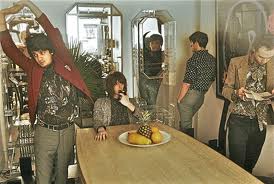 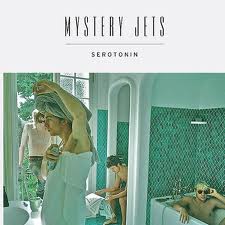 “Pure, passionate pop magic, impeccably produced by the legendary Chris Thomas”
My friend Josh Baze is a sharp, critical listener with an abiding love for Brit-pop. I’ve been listening incessantly to one particular new release in large measure based on his recommendation. His ardor is contagious, and so is Serotonin, the third album, released by Rough Trade, from the lads from Eel Pie Island (downstream from London in the middle of the Thames) called the Mystery Jets.
Blaine Harrison’s plaintive tenor suggests Win Butler, and the wounded gravitas of Jeff Buckley. But Harrison’s singing style and songwriting talents evidence a more abiding feel for classic pop hooks than either of those artists. He’s been making music since he was a wee lad. His father, Henry, a founding member of the band who still contributes to their studio efforts, inspired him to develop his talents as soul salve to the challenges of growing up with spina bifida. Today, he looks like a dreamy pop icon – just one who rarely performs from a standing position. Harrison’s art isn’t about his disability, though. It’s universal. His songs address the intense yearning for connection that runs deep through the crucible of late adolescence (and sometimes, drugs).
Josh observes that Serotonin would be perfect music for a new film from the late John Hughes. The songs on Serotonin capture those essential moments form youth that you either want to freeze forever or be freed from in a hurry. With the experienced guidance of producer Chris Thomas (Roxy Music, Sex Pistols, the Pretenders, etc.) Mystery Jets have made an album on which every note is perfect, nothing is superfluous; the arrangements are rich, dense, but never fussy or excessive.
A doomed romanticism, reminiscent of Roxy Music, pervades Serotonin. Guitarist William Rees shares Phil Manzanera’s way with combining convulsive, noisy avant-pop elements with tough, spare, soulful rhythm playing (think John Fogerty or Steve Cropper, re-contextualized). Harrison’s synthesizer parts range from perfect mock-horn lines to deep chordal patterns that underscore the band’s gorgeous harmonies to random, jagged noise bits that echo Brian Eno.
On the opening cut, “April Springs,” Harrison pines “freedom is an illusion generated by your brain," making his plea for attachment.  Over five minutes long, “April Springs’ wastes nary a second. “The Girl is Gone” laments lost love with a nod to the Psychedelic Furs. While Harrison can lean too much on lyric cliché, he’s also capable of gems like “the birds and bees have all caught STDs” from “Flash a Hungry Smile.” “Show Me the Light” combines disco beats, slide guitar, acapella vocals and synth-bells – all woven artfully into one peerless pop production.
“Dreaming of Another World’s” soaring melody epitomizes Serotonin’s Hughes-worthy properties; it’s catchy, evocative, and emotionally resonant. “Lady Grey” pumps punk-rock energy and recalls Carole King with it’s “will you love me in the morning” lyric, while Thomas’s production on “Melt” evokes a post-punk version of Phil Spector to accompany the band’s obvious nod to Modern English.
Especially stunning is “Lorna Doone,” a beautiful, brooding lysergic lurch of a song that recalls the droning insistence of songs from “Tomorrow Never Knows” to “Station to Station, “ as Harrison nails the bitter “I wish I could say I believe this is goodbye, but I don’t” lyric with precise passion.
The Mystery Jets are studious pop omnivores. They reference sounds that might make the average dude-rocker queasy (10CC, Supertramp, Hall & Oates, and Depeche Mode). But Blaine Harrison and company make Serotonin more thrill than froth, more bracing than bland. Serotonin is a giddy, kaleidoscopic pop thriller. And, yes, it would be a magnificent soundtrack to that 2015 John Hughes flick.
Reverberating: 9.0 (original), upgraded to 9.3
Posted by Unknown at 11:09 AM No comments: