Welcome to the top 25 for 2010 Countdown! Each day we'll countdown, today we continue with number 17, culminating with our (okay, my) numero uno album of the year. When they're handy I'll borrow my earlier reviews from the KC Free Press. Since I hadn't reviewed the Parting Gifts previously this is a NEW REVIEW. 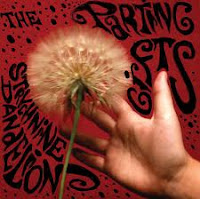 "Reigning Sound + Coco Hames = Parting Gifts"
The most recent record by the Ettes (Do You Want Power) was co-produced by Greg Cartwright of Reigning Sound and Oblivians renown. The Ettes lead singer Lindsay ‘Coco’ Hames hung around Memphis long enough to work on a further collaboration with Cartwright and the Reigning Sound. They call themselves the Parting Gifts. Heck, it would be a damn good record if it was just the Reigning Sound, but Hames’ contributions kick the sessions into another gear. Hames has one of those voices, a voice that can suggest such inspirations as Ronnie Spector and Wanda Jackson, but that possesses a unique character all its own.
The album is called Strychnine Dandelion, and it is a treat. It’s essentially a Reigning Sound record with Hames as guest vocalist – she sings with Cartwright and takes lead on five of the fifteen (short, sweet and sassy) tracks. As such, the band sound is much in keeping with Reigning Sound’s output. Dave Amels, who co-produces, shines on keyboards throughout. There are few players these days whose stylistic range and ease remind of the great keyboard players of the past; Amels would hold his own in the company of guys like Barry Beckett, Nicky Hopkins and James Dickinson. His seasonings are all over Dandelion.
Cartwright does what he does so well, synthesizing British rock, American garage (Sixties, the original Nuggets and Pebbles type stuff), and Southern soul stew with character, passion and brilliance. His knack for such blends is obvious on the opening cut “Keep Walkin’” – the Parting Gifts pulling off a cross between Sir Douglas Quintet, Del Shannon and Stooges circa Raw Power. “Bound to Let Me Down” and “My Baby Tonight” feature Cartwright’s way with early Beatle twists on Latin rhythms. “Strange Disposition” borrows in both name (“This Strange Affect”) and sound from the Kinks, the band bringing Muswell Hill to Memphis, making a genre bending exercise into a convincing song.
Cartwright’s a sharp songwriter. You can hear his attention to detail on songs like “Staring” with its’ Springsteen urgency, nifty rhymes like ‘aspartame/same,’ and killer bridge. On “I Don’t Wanna Be Like This” he combines a torch song and working class lament with feeling and without pretension.
The songs Coco Hames contributes (it gets confusing – she writes a few songs here, including one that Cartwright sings) range from the Loretta-Skeeter-Dolly styled country tearjerker “This House Ain’t a Home,” to the cow-punk rave up “My Mind’s Made Up,” to the rocker (dig the Stones-y fuzz bass) “Born to Be Blue.” Cartwright plums from the Stones odds and sods collection Metamorphosis again (Reigning Sound did a tear up version of “I’d Rather Be with the Boys” on Time Bomb High School) for “Sleepy City,” Hames fusing Ronnie Spector and Lulu while Cartwright arranges with an ear toward Phil Spector acolytes like Roy Wood and Dave Edmunds.
Dan Auerbach (Black Keys), who co-produced Do You Want Power with Cartwright, and Patrick Keeler (Greenhornes/Raconteurs) make guest appearances on Dandelion. It’s the kind of project that finds top-notch contributors ready to check their egos to make a really good record. And that’s exactly what Strychnine Dandelion is.
Reverberating: 8.8
Posted by Unknown at 7:49 PM No comments: