The Countdown Continues with Diamond Rings at No. 6.

Welcome to the top 25 for 2010 Countdown! Each day we'll countdown, today we continue with number 6, culminating with our (okay, my) numero uno album of the year. When they're handy I'll borrow my earlier reviews from the KC Free Press, which as of today means I'm screwed because that site just went dark. Thus, I'll be scrambling to find original copies of the reviews for Countdown titles 1 through 5.
Woe is me.

Not an issue this time, though. This is a NEW REVIEW (just 4 U) of our No. 6 record for 2010 on the Countdown - a nifty record by Diamond Rings called Special Affections.


"Spare songs of love and resilience for the dance floor" 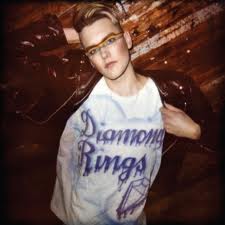 John O’Regan, the man behind Diamond Rings, is a lanky 6’4” former athlete who bears a slight resemblance to Leonard DiCaprio. As Diamond Rings he looks more like some high school geek dressed as David Bowie’s ‘Aladdin Sane’ persona for Halloween. The gawky look may be screwy, but Diamond Rings’ Special Affections is anything but. O’Regan’s made one of the best records of 2010. His work on Special Affections is a pitch perfect blend of Casio and Telecaster elements, of Eighties analog synthesizer sounds and spare, ringing guitar lines and power chords.
The sonic platform may evoke Kraftwerk, Depeche Mode, the Human League and the Cars, but the songs also reflect a broader vision. They can embrace Springsteen’s quotidian passion (“It’s Not My Party” pulls the neat trick of riffing off Lesley Gore’s “It’s My Party” while maintaining the doomed, dead end ethos of a song off Darkness on the Edge of Town), the melodic arc of the Beach Boys (the ‘ooh’s’ on “All Yr Songs”), and hip-hop influenced vocal phrasings. While this seamless blend is impressive, were it not for the quality of the songs the vitality of O’Regan’s synthesis would pall. But the songs are damn good. Electro-trappings aside, like Vince Clarke’s best songs (Depeche Mode, Yazoo, Erasure), these tunes could be performed on an acoustic guitar or piano and be equally convincing. At that level, Diamond Rings are the antithesis of an amped-up confection like Sleigh Bells
Not only do O’Regan’s low budget electronics not detract from these songs, they anchor them. Resembling such archetypes as Iggy’s “Nightclubbing,” they succeed as pop songs and dark grooves, grooves that settle in and are in no hurry. O’Regan has an uncanny knack for sensing which songs benefit from what sort of instrumental base - which profit from minimal piano lines, and which need predominant guitar (“Something Else” – scathing, and of course a title borrowed from Eddie Cochran).
As a lyricist O’Regan is poetic and direct; Special Affections’ key themes are love, friendship and identity (songs like “On Our Own” and “You and Me” develop all three). Some songs resonate because they establish meaning through humor. O’Regan has all sorts of fun with music fan in-jokes (not just the Lesley Gore reference in the title of “It’s Not My Party,” but, from the same song, lines like “born under punches and a real bad sign” – alluding to the curious combo of Talking Heads and Albert King). Then, of course, “You Oughta Know” references Joy Division (“I’ve been looking out for unknown pleasure”).  He doubtlessly gets that the song’s title is mischievously borrowed from that more famous fellow Canadian, Alanis Morissette. O’Regan seems to take some perverse glee in referencing tunes, lyrics and sounds, but his jokes are never at the listener’s expense.
Speaking of Joy Division, O’Regan’s crooner baritone evokes Ian Curtis - minus the manic edge. Sometimes he sounds like Johnny Cash morphed with “Berlin” era David Bowie. Others, he suggests Nick Cave or Neil Hannon (Divine Comedy). That said, in both timbre and rhyme droppin’ sensibility O’Regan maintains a clear identity. O’Regans’ doleful delivery has the knack of lending authority to his slighter rhymes while his square, but decided swing conveys a sarcasm that keeps his weightier lyrics from turning pretentious.
O’Regan continues to work with a Toronto post-punk guitar outfit called D’Urbervilles. Their sound is at once more guitar based and dance oriented. In the final analysis there’s something about the rigidity of Diamond Rings’ “Garage Band” rhythm tracks that roots the songs, something that gives them depth compared to the jerky post-wave qualities of the D’Urbervilles, at least as observed on the tracks I’ve auditioned. Throughout Special Affections, Diamond Rings is the ideal vehicle for John O’Regan’s aesthetic – a little bit synth-pop, a little bit rock, and all in the service of his surprisingly seductive songs.
Reverberating: 9.2
Posted by Unknown at 8:45 PM No comments: