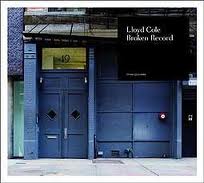 Born in Derbyshire, Lloyd Cole met the gents who became the Rattlesnakes in his abbreviated stint at Glasgow University. Their self-titled debut in 1984 was a breath of fresh air in the sometimes polluted atmosphere of post-punk and dance-whatever. Cole’s literate lyrics, dotted with pop cultural references (he dropped names like no one since Elliott Murphy), walked the line between sentiment and cynicism in endearing fashion;  his sweet, dry talk-sing borrowed heavily from Lou Reed, and the Rattlesnakes combined new wave energy with a cool classicism. Easy Pieces in 1985 was an impressive follow-up, but after Mainstream in 1987 the band was no more and Cole went solo.
He’s made records for a long list of labels – Geffen, Capitol, Rykodisc, What Are, etc. – some of them, like The Negatives from 2004, served as reminders of his talent, but honestly all but a few fans ceased paying attention. Some time ago he moved from his native Britain to Massachusetts. I caught him playing solo at Joe’s Pub in Manhattan a few years back. He’s not a pre-possessing performer, but between his good humor and smart, wryly observed songs he provides a delightful evening’s entertainment. Sure, he once had videos on MTV in the Eighties and looked poised for commercial success, while today he’s a journeyman.
His last several recording projects have been autonomous affairs, and he’s toured with a suitcase and a guitar for several years. Broken Record is the result of his determination that this batch of songs needed a bit of rocking up. At fifty, Cole is on yet another label, this time Tapete, a German imprint with limited American distribution. They gave the green light to these sessions which were also financed at least in part by a thousand or so fans who coughed up $45.00, mostly as patrons of the art, partly to ensure receiving a deluxe edition of the album upon release. Ah, the vicissitudes at the intersection of art and commerce in 2011. But don’t cry for Lloyd. He must treat his fellow musicians like a gentleman. He called some musician pals, including Fred Maher on drums and Joan (the Policewoman) Wasser on several instruments, and assembled a really fine band. The resulting album Broken Record finds him at (or at least near) the top of his game.
The razor sharp guitars of the Rattlesnakes era are replaced in large part by Americana sounding instrumentation, often featuring banjo, pedal steel and mandolin players, although the guitars get cranked up occasionally (as on the pleasantly twisted solo for “Double Happiness”). As ever with Cole, the arrangements and musicianship are in service to the songs. And the songs are good. “Like a Broken Record” chronicles the denouement of a love affair. Always deft with the wink and nod to his mentors, Cole employs the repetitive “broken” conceit from Dylan’s “Everything is Broken” in the song’s catchy bridge. Self-effacement going hand in hand with craft, Cole begins and ends the tune with the line “not that I have that much dignity left anyway.”

“Writers Retreat!” humorously addresses the clichéd anxieties and entreaties of the professionally creative. Mark Schwaber’s mandolin part is a gift from Mott the Hoople’s “I Wish I Was Your Mother.” Lloyd must have been listening to the Mott record; for “That’s Alright” (itself a Dylan nod) he takes Mick Ralph verbatim (“loving you is hard enough”) - the song, a kiss-off to a grasping, entitled neurotic, has the gentle sting that Cole specializes in.
More influence spotting? Well, “Why in the World?” not only could have been sonically lifted from Lou Reed’s Coney Island Baby, Cole also alludes to the Velvet’s “Beginning to See the Light” (“when did I cease to see the light”), and resonantly refers to the Beach Boys’ “I Just Wasn’t Made For These Times” (“maybe I’m not built for these times”).
That’s no slight on Cole, though. He just wears his influences on his sleeve, like a man who knows where he comes from. And he comes from a tradition of songwriting that honors craft in an age of loops and chanting. A creeping autumnal sense is at the heart of many of these songs. Heck, the reference to a broken record on the title cut is reinforced by “The Flip Side” -  first by title, second its “And Then He Kissed Me” intro, and finally  in sensibility; it captures the musings of a literate fellow confronting a post-literate world.“Rhinestones” is enigmatic by Cole standards with references to “dancing on the White House lawn” and an inability to “go back to K Street.”
What if Lou Reed recorded in Nashville? It might sound like “If I Were a Song,” which also skirts Leonard Cohen territory respectably. Both Cole and Cohen know when to switch from earnest poetics to pop “la la las.” Only “Oh, Genevieve,” catchy enough for what it’s worth, sounds like a song written as exercise.
The economics of this business being what they are it’s hard to say whether Cole can take this band on the road. Beyond considerations of expense, many of them have other bands and commitments. But if he could they’d undoubtedly grace these songs, and Cole’s older material (including the classic Rattlesnakes songs ‘Perfect Skin,” “Are You Ready to be Heartbroken” – ever hear Sandie Shaw’s version … awesome, and “Brand New Friend”) with their musicianship and superior song sense. Whatever is down that road, Lloyd Cole fans can celebrate Broken Record, one of the artist’s finest records.
Reverberating: 8.8
Posted by Unknown at 2:22 PM No comments: