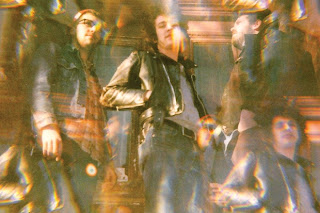 But Nude Beach they are. And their second album (yup, II) is one damned entertaining piece of work.

They come from the Brooklyn scene; maybe they thought their name would look good on bills with Passion Pit, Animal Collective and Grizzly Bear (okay, maybe Nude Beach isn’t so bad).
It’s for damn sure that nothing about Nude Beach fits in with the rest of the Williamsburg sound. The above bands sound like trustafarians plotting new directions in pointless obscurity. When Grizzly Bear performed recently on “The Colbert Report” the song they played was shapeless, meandering, and lacking a distinct chorus. This foolishness passes for innovation among the self-select in America’s largest post-graduate ghetto. Snore.
Instead, Nude Beach seem to have swallowed the Seventies whole – and the good parts mostly. Among the icons pictured on their inner sleeve are Bruce Springsteen, David Bowie, and Dee Dee Ramone – indicative musically, and even more in terms of affinities.
The band’s debut album is not widely available or distributed. I’ve heard bits and pieces on YouTube videos, and it smacks a bit more of post-punk and grunge leftovers than II’s trimmer, coolly classic rock approach. Nude Beach’s music demonstrates that innovation and novelty are not necessary qualities for rock pleasure. For Nude Beach it’s more about choosing inspirations judiciously, working on craft and performance, projecting energy and just enough individuality to make something familiar sound fresh again.

To be honest, nearly every time Chuck Betz opens his mouth I find myself thinking of Tom Petty. Listen to the way he sings the line “so hard to believe” in “Walkin’ Down My Street.” Okay, it’s obvious he loves some Tom. But that’s not such a bad thing. Betz, in particular, recalls the steely, pissed off Petty that the FM rockers mistook for punk. “Street” also recalls Springsteen’s “Sherry Darling,” and a time in the Boss’s life before the mantle of sobriety was heavy upon him. There’s also a wound up quality to Betz’s delivery on a song like “Some Kinda Love” that captures David Johansen’s raw edge and the urgency of a young Paul Westerberg.
Betz’s songs are mostly about girls - bad girls, good girls, obtainable girls, distant girls – okay, girls. When they’re not they’re about direction, identity, destiny; it’s standard rock lyric stuff. Not too many lines leap out or grab you by the poetic neck, but his sentiments are expressed intelligently and with a passion that’s believable and idiom appropriate. Musically, they’re complete songs. You know, the kind with verses, b-parts, bridges (where necessary), and hooky choruses.

Betz is also a good guitarist. He manages to slam a quick solo into every short song here. Frankly, it’s refreshing in an era when too many bands seem to lack a real instrumental voice. He’s a gritty player who balances kinetic flair with melodic phrasing. Betz sounds like he’s absorbed Mike Campbell, Mick Ronson and Springsteen to be sure, but there’s also a touch of Robert Quine and Richard Lloyd in his biting, lyrical lines.
Jim Shelton on bass and drummer Ryan Naideau are a powerful, propulsive rhythm section, complementing Betz’s guitar and keyboard work. Together they keep things rock simple, but not without a refreshing variety of ensemble touches. “You Make it So Easy” evokes the subtle Latin feel the Beatles employed so well (it also features one of Betz’s best lines – “I’m tired of all your believing you’ve seen into the depth of my soul”). “Keep it Cool” borrows reggae rhythms reminiscent of Television’s Jah-twist on “Prove It.” “Cathedral Echoes” is folk-rock gone thrash, like vintage Dils. “Didn’t Have to Try” shoots for soul balladry; Betz’s vocal approach relaxed a little, a bit evocative of Chuck Prophet.
“The Endless Night” manages to mix Supergrass with Springsteen, Betz pulling off a serpentine dual-lead. For all their fealty to classic rock values, Nude Beach is brash and driven in a way characteristic of New York bands. It keeps them out of Seventies-Satin-Tour-Jacket hell. They will occasionally put you in mind of early Mink DeVille, and inevitably the Velvet Underground, especially on the surging “VU” vintage inspired “Loser in the Game,” the band rocking it “Foggy Notion” style.
I’ve been listening to II steadily for the last two weeks, half anticipating that its charms would subside. But they haven’t. Nope, it’s a sharp, satisfying rock ‘n’ roll record that sticks with you, even after repeated listening.
Reverberating: 8.6
Posted by Unknown at 12:57 PM No comments: