“Praise be to Nero’s Neptune, the Titanic sails at dawn.”

From “Desolation Row,” from one of Bob Dylan’s truly great albums Highway 61 Revisited. 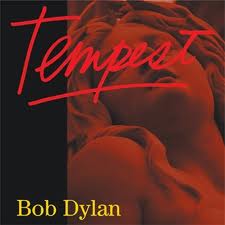 Honestly, it was probably as much as he needed to say about the god damn Titanic. At thirteen plus minutes, the title track of Tempest is ‘about’ the Titanic.” It’s a trusty Dylan conceit, a concoction of history, narrative, myth, fiction, and darkness, It’s also  a  muddled mess that Dylan defenders are trying to will into being another masterpiece. Meh. It owes no small debt to the New Lost City Ramblers song “Titanic,” by the way.  Shit, by the end of the song I was reminded of John Lennon’s offhand remark concerning some Beethoven symphony (some classical piece, anyway … work with me!) that George Martin played for him. When George asked him what he thought, John replied “I don’t know, George, by the time it was over I couldn’t remember what the beginning sounded like.” What John said.

Speaking of John, “Roll on John” is widely interpreted as Dylan’s ‘tribute’ to Lennon. Well, he does (pointlessly) string together lots of Beatle song titles, lyrics, images of “Liverpool docks” and so forth. But it all adds to not so much. There is no emotional truth, no heartache core. And on this one song Dylan’s vocal is muddy in the mix (and I don’t mean Waters), where it is otherwise front and center throughout Tempest.

The rest of the record … it’s pretty entertaining. Yes, entertaining. The last time Bob illuminated much for me was on Love and Theft, a revealing, lovely piece of work. I love especially the song ‘Mississippi,’ a beautiful song about kindred feeling as has ever been written. Thank God Dylan salvaged it for me after first hearing Sheryl Crow’s insensitive cover, a dopey rampage through its nuanced words. Tough and tender in all the ways that a mean spirited affair like Tempest is not, Love and Theft (released 9/11/2001) remains Dylan’s last great record.

On Tempest, Dylan’s merry band traffic mainly in blues idioms, rocking in a pre-rock ‘n’ roll kinda way; which is hunky-dory, Bob has been there for years. Material like “Duquesne Whistle” and “Soon after Midnight” flail a little for me because the loose swing of the band should allow room for a little more flash and interaction between the musicians. Bob has a really hot band on a tight fucking leash. The arrangements that hue closer to blues, especially Chicago blues grooves generally succeed more than the jazzy affairs.

“Long and Wasted Years,” with its courtly central figure is a respite; Dylan letting his confessional hair down, without rancor or recrimination. But rancor and recrimination are soon to come, and brilliantly I admit, on “Pay in Blood.”   Son of a bitch, man, who pissed Bob off this bad? “Pay" makes “Positively Fourth Street” sound like a love letter. This is Bob as biblical reckoner, Western avenger, gunslinger, really fucking Old Testament. But it’s a kick, partly because of its unlikely foundation on Smokey Robinson’s “Tracks of my Tears” changes. And because revenge and vengeance bring out the best in Bob’s remaining croak of a voice. Still, as the protagonist (Bob? One can neeeever be sure) sings “I’ll drink my fill, and sleep alone” you realize that being right all the stinking time comes with a price, and is in fact a giant pain in the ass.

“Scarlet Town” is about the same darkness, if you will, only writ large and on a broader social canvas. (Scarlet follows blood. Got it, Bob.) It’s another Dylan slaughter of vanity, and human hubris. It’s about Washington D.C., the Kennedys, about being lost, distance from God, because after all – “there are no trials outside the Gates of Eden.”

The lyrics throughout Tempest have touched off the typical speculation as to Dylan’s religious convictions. Everyone wants to paint him into their corner. But Bob’s always been elusive. I think Dylan views myth and history as poetically indistinguishable. That for him mythological truth is more powerful than scientific truth.

As Sly Stone sang “my own beliefs are in my song.” But it’s not as simple as that, because in the case of Dylan I think this means that his belief is literally in these songs. The music is where he finds mystery, love and comfort in dark circumstance. So, remember, if you’re claiming Bob Dylan, you are forgetting that he is Protean, and a shapeshifter, a great modern artist.

“Early Roman Kings,” more Muddy, more blues. “Early Roman Kings” is about flash gangstas – not no Caesars. David Hidalgo’s accordion adds a Latin edge. “The peddlers and the meddlers they buy and they sell, the destroyed your city and they’ll destroy you as well.” Death and decay lurk around every corner.  The “Early Roman Kings” may make look sharp in their sharkskin suits, but they are trouble.

And really, there’s your album. Wherever humans lurk, mischief is at hand; unless we’re talking about those elusive moments with the right woman, in Bob’s world.

“Tin Angel,” is as desolate, violent and unrepentant as any English murder ballad, a form from which the song originates. It’s a grisly tale. But in a venerable ballad like  “Matty Groves,” the young bride of a noble dick defiantly declares her love for the slain poor boy, Matty. Big hearted shit. “Tin Angel’s” characters, though, are part Jim Thompson, part antebellum South, and basically, you know, unsympathetic.

And that’s what I find depressing. Look, the great Bob Dylan, the for sure Shakespeare of the rock era, is in no way responsible for keeping spirits jolly. Death may be your Santa Claus, and all that. But hey, the man has lived. And to find his aesthetic persona so bereft of mercy, so shorn of grace at this age, while so full of anger, and vitriol. Shit, it’s sad. You know? I wanna give the old bastard a friendly punch in the arm.

I’m no idiot. I know the seeker doesn’t always find. Or find what he or she was looking for. Life’s a teacher with a rod a yard long. I get it. But remember the charity and love that fueled Blood on the Tracks,(forget “Idiot Wind” for a moment – and even that conceded “we’re all idiots, babe!”) Or even the dark empathy that animated an accusation like “Jokerman?” Bob, Bob, Bob, at this point you are wearing my ass out. Go fishing, I know you like to. Listen to that first Thumbs album that Martin Keller gave you. That would make you giggle. Peace.