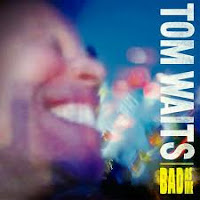 Tom Waits. When he’s good, he’s very good. When he’s … well, he’s never really bad, but sometimes he relies on shtick. Let’s face it; when your vocal persona is distinctive enough that it’s imitated (ripped off) for a television commercial it’s either preternatural or affect. Okay, it’s a little of both, but nobody’s born with that voice. And sometimes it serves him brilliantly, other times it’s sui generis, but empty. On Bad as Me, Waits first studio album since 2004’s Real Gone, and the first entirely successful collection since the excellent Mule Variations in 1998, Waits engages the full range of his vocal personae, intuitively matching them to the individual songs.
Waits’ career has certainly gone through phases. In his early years he was a bedraggled, barfly balladeer, long on equal parts cynicism and sentiment. By the Eighties he’d engaged his inner Captain Beefheart and Howlin’ Wolf. Not a bad move, given that vocally he was never going to be Tim Buckley. With Swordfish Trombones he took cues from Harry Partsch’s school-of-the-home-made-instrument, and his lyrics dropped some sentimentality in favor of noir. Waits moved into territory that sounded like Lord Buckley narrating Jim Thompson. And it worked. Leavened with a dash of commercial sensibility for Rain Dogs, he made an album that combined the best of his worlds. The introduction of Marc Ribot on guitar was pivotal to this slight shift. Ribot has remained a consistent collaborator, who has helped shape Waits music since the early Eighties. He remains a vital contributor to Bad as Me.
Read more »
Posted by Unknown at 8:30 PM No comments: