Reverberations: Dum Dum Girls - He Gets Me High (Sub Pop)

Reverberations: Dum Dum Girls - He Gets Me High (Sub Pop):
Posted by Unknown at 1:40 PM No comments:

Dum Dum Girls - He Gets Me High (Sub Pop) 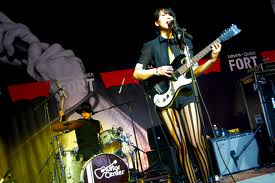 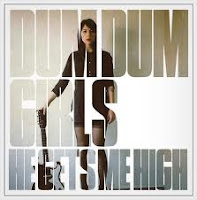 Kristin Gundred’s Dum Dum Girls follow up I Will Be (Reverberations No. 21 album of 2010) with an extended play called He Gets Me High, four songs that both re-establish and finesse the sound from the debut album.
Famed producer Richard Gottehrer (Blondie, Richard Hell, Go-Go’s, etc.) returns as co-producer. Joining he and Gundred (aka Dee Dee) in the booth this time is Sune Rose Wagner from the Raveonettes. Gottehrer produced the Pretty in Black and Chain Gang of Love records for the Danish band, but hasn’t worked with them since 2005. Wagner’s production on Lust Lust Lust (2007) took the Raveonettes as far down the road to distortion wash-out as they cared to go, and he’s been guiding the band back to something more akin to Gottehrer’s mixes on the earlier Ravenonettes recordings. As chief recordist on these tracks Wagner seems to be making the same kind of moves on the Dum Dum Girls that he is on his own band’s new recording Raven on the Grave. The message being: Noise is awesome, but melody is boss.
So, the DDG sound is a bit less distortion heavy this time around, leaving the gnarliest feedback for solos and single note guitar lines; otherwise, the sound of He Gets Me High gravitates toward feedback jangle-pop, still retaining the girl group and punk influences prevalent on I Will Be. Where the latter seemed set on an almost aural-cubist juxtaposition of instrumental elements in the mix; He Gets Me High plays it comparatively straight. Perhaps it has to do with a newfound authority in Gundred’s vocals. On I Will Be her singing was pretty and functional, but not always expressive. She still doubles lead parts and sings certain vocal leads in harmony, but here her singing exudes a new confidence. In fact, on “Take Care of My Baby” she composes and nails a melodic line that would do Chrissie Hynde proud. Gundred’s emergence as a front woman portends the DDG coming out of the noise-girl pack (Vivian Girls, Frankie Rose, etc.), capable of making moves toward the mainstream without compromising their vision. Lyrically the song is a love song to a loser that’s reminiscent of Johnette Napolitano’s (Concrete Blonde) serenades to dissolution, “Joey.”
“Baby” is powerful without employing a full drum sound; throughout HGMH the producers do a great job of getting the most out of incidental percussion parts, especially tambourine. The title song harnesses a Kinks/Romantics syncopation in service to a song who’s lyric is pure T. Rex – ‘electric fate with a cosmic kiss’ will send you to your Bolan-ictionary.  “Wrong Feels Right” opens the ep with some rapid fire Buddy Holly (“I’m Gonna Love You Too” vintage) drumming, and piercingly distorted lead guitar lines – all decorating a lyric that’s “If Loving You is Wrong” goes indie-rock. It’s a self-abasing sentiment that transcends genre; that’s for sure.
HGMH concludes with the Dum Dum’s cover of “There is a Light That Never Goes Out” by the Smiths. Faithful to the original, right down to the “Hitchhike”/”There She Goes Again” turnaround, it diverges from the Smiths’ version primarily by upping the tempo just a tad. Gundred’s vocal channels Morrissey channeling Sandie Shaw, closing the circle of influence gorgeously. I’ve hardly been able to play this once without playing it again; it’s infectious.
An entire album of songs this good, recorded with these production values would be welcome from the Dum Dum Girls. There are no performance credits on the sleeve notes, so it’s likely that Gundred is primarily responsible for the music played here, despite having put together a touring version of the band. Sub Pop does a lovely job with packaging. They’re one of the few labels giving a consistent incentive to buy physical goods. But old-school notes on who plays and sings what would be, you know – helpful. But whether it’s the work of a solo auteur or a real band, He Gets Me High sounds great. And I’m all over the band ethic and mythos, but if Gundred can get the job done on her own this well, more power to her.
Reverberating: 8.7
Posted by Unknown at 9:29 AM No comments: