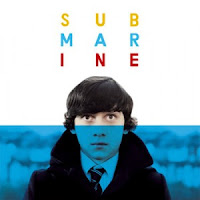 Turner’s no rube. His parents were teachers, his dad Music, his mom German. Turner himself has said that he’d have pursued studies in English at the University of Manchester had his year off to take a shot at playing music not paid off. Of course it did pay off. The Arctic Monkeys are as big as it gets in the U.K and have made serious commercial inroads in the States. Their fourth studio album Suck it and See is out soon, their fourth in five years. The band tours relentlessly.
None of this has kept Turner busy enough it seems. His collaboration with Miles Kane and James Ford in the Last of the Shadow Puppets struck a bittersweet Sixties/Seventies obsessed tone with Beatles, Bowie and Scott Walker inspirations. Compared to the blazing guitar intensity of the Monkeys, Age of the Understatement was by turns a wistful and rueful set, an urchin’s take on beau monde. More stripped down in arrangement than Understatement, Turner’s songs for the film Submarine feature two guitars, a dash of keyboards and the rare drum track. Not having seen the film (the tale of an alienated teenage boy in Swansea who is romancing a troubled young girl and whose parents are in marital disarray) I can’t really comment on how the songs work in the film. But they stand by themselves splendidly.
While the story line may sound like something out of the aforementioned Mr. Hornby, the author of the book on which the film is based is named Joe Dunthorpe. Directed, in his feature film debut, by Richard Ayoade, the movie adaptation has earned kind comparisons to Wes Anderson, America’s skewered, cinematic voice of American post-adolescence.
My impression is that Turner’s songs, while mostly from the point of view of the film’s fifteen year-old protagonist Oliver, actually shift between a first person voice and that of a (omniscient) narrator.

“Stuck on the Puzzle” has a melody that would suit Morrissey’s pinched croon and serenades a character that’s “used to being told that you’re trouble.” Simple drums and a sustained guitar thrum carrying Turner’s wounded, lovely tune. For “Glass in the Park,” our protagonist “picked up speed to jump your palisades” like some character from early Springsteen, all romantic bravado as he assures his intended that it’s “a matter of urgency.” This from the same guy who in “Stuck on the Puzzle” swore he wasn’t the “kind to sit and sing to you about the stars, girl.” Ah, adolescent confliction.
Write a song based on acoustic guitar with the word ‘wind’ in the title and you’ll get a Dylan comparison, It’s actually not “Blowin’ in the Wind” that “It’s Hard to Get Around the Wind” evokes, but “Don’t Think Twice It’s Alright.” With his modest, restrained delivery, Turner sounds like a young Donovan singing about destiny and (simple) twists of fate. One nice line insists that you need a wristband to get into heaven (okay, Paul Simon just suggested that you take a number and get in line in “The Afterlife” from his new record So Beautiful or So What). Leave to our jaded romantic artists to deny you any sublime notions of the afterlife.
All of these songs are keepers, but “Piledriver Waltz,” the best Procol Harum song Keith Reid and Gary Brooker never wrote, provides a fine, fitting conclusion. Turner sounds mocking or sweet, depending on your perspective or interpretation, as he implores someone “when you go walking on water make sure you wear comfortable shoes.” There’s a literary edge to lines like “the waitress was miserable, and so was your food,” evoking the dull, everyday despair that sits like the English fog on the heart stymied.
Alex Turner’s sharply observed, sad, sweet songs for Submarine demonstrate that he will most certainly have life as a songwriter and artist when and if he tires of the rock grind. In a way this work sounds a bit like a less dissolute version of Peter Doherty’s acoustic music, fitting in a way given that the Arctic Monkeys probably took as much from the Libertines playbook as any other influence. And while I remain a great admirer of Pete’s, Turner’s prolific and consistent art suggests that the lad from Sheffield’s work ethic has served him well.
Reverberating: 8.6
Posted by Unknown at 9:49 PM

BlueHost is ultimately one of the best hosting provider with plans for any hosting requirements.