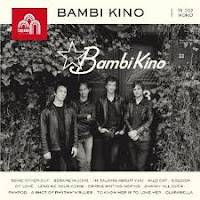 Bambi Kino was the name of the theater that provided exceedingly modest accommodations for the young Liverpudlians (George Harrison was an “illegal” seventeen years of age) known as the Beatles when they began their legendary tenure in Hamburg, Germany. They first played the Indra club, later the Kaiserkeller, Top Ten, and Star Club, as they worked their way up the rough and rowdy Hamburg club circuit.
Bambi Kino is also the name of a band of American rock veterans (members of Guided by Voices, Nada Surf, Cat Power, and Maplewood) obsessed with recreating the sound that a formative Fab Four blasted out of the Indra club. For the fiftieth anniversary of the Beatles Indra/Hamburg debut, Bambi Kino (the band) played several dates at the Indra with a repertoire comprised entirely of songs that the Beatles played from that period.

The result is highly entertaining. The love these guys have for the Beatles, and for the vision of rock they incubated in Hamburg’s dirty, sweaty bars, is palpable. For Beatles fans, you know, what’ not to like, huh? It seems so simple. If you enjoy the sound of the (very) early Beatles you’ll enjoy Bambi Kino.
True enough. But it’s not so simple. Sheer pleasure aside, Bambi Kino raises some interesting questions about, shall we say, methodology. While these basic tracks may have been recorded in performance at the Indra, they were either recorded without an audience or taken from the soundboard absent audience noise, applause and interaction. The liner notes also indicate that additional tracking was done in Manhattan and Brooklyn, subsequent to the Indra shows. As such, the live vibe, obviously intended by recording at the Indra, is a bit qualified.
Outside of odd tracks from the Anthology series and bootlegs, the closest the Beatles recorded catalog gets to this repertoire and sound is probably on the Live at the BBC set. Several of the songs on Bambi Kino are also represented on the BBC recordings. Of course, those recordings come from 1963-1965. What does that matter? Well, the musicianship of the Bambi Kino is a notch above that the Beatles offered in 1960. I suppose you can’t knock these fellows for sounding “better than the Beatles” (in 1960, anyway). Eric Paparazzi’s bass lines emulate Paul McCartney’s innovative, propulsive style. The problem here being something truly evocative of the Beatles in 1960 would feature bass playing like Stuart Sutcliffe’s, which wasn’t very good. And while Ira Elliot’s drumming isn’t a dead Ringo for Mr. Starr’s playing, it’s closer in technique and feel to Ringo’s playing than Pete Best’s (and Pete played with the Beatles in 1960). Pete was a decent drummer, but he was tossed for Ringo for reasons beyond his lack of a sense of humor; Ringo had better time, more drive and way more style. Therefore, give Bambi Kino points for aesthetic choice, but deduct for historical verisimilitude.
Vocally, whoever covers Paul’s lead vocals comes closer than whoever essays John. And I have a strong sense that the New York overdubs were required primarily so that Bambi Kino could nail the harmonies that the Beatles, even in 1960, executed so robustly. I’ve often thought that after 1964 every band in the world must have decided to emphasize something special about their sound other than ensemble singing, because the Beatles pretty much threw down the gauntlet on that, scaring off all competition (except maybe the Hollies). Overdubbing allows Bambi Kino to approximate the Beatles’ harmonies, but honestly it feels a little like cheating.
The twelve tracks, chosen from approximately fifty that the Bambi Kino covered in Hamburg, are representative of the Beatles’ 1960 repertoire, which is to say that cornball shit like “Besame Mucho” and “Lend Me Your Comb” sits side by side with Bambi Kino’s rockin’ version of Leiber- Stoller’s “Some Other Guy” and their spirited take on Arthur Alexander’s (written by Cason-Moon) “Soldier of Love” – a Lennon showcase in the Beatles set throughout the early Sixties. In terms of performance, there’s little to fault here. Guitarists Doug Gillard (GBV) and Mark Rozzo reprise the Harrison-Lennon team with just the right combination of historical sensibility and performance excitement. Bambi Kino knows the material, and they know how to deliver it.
But for the knowledgeable Beatles fan it’s hard not to notice that Bambi Kino actually, painstakingly accurate repertoire aside, sound more like the Beatles circa 1963 - minus the(ir) ever growing catalog of original material. And try as they might (recording in mono, at the Indra) there’s a certain mid-range density and compression to these tracks that doesn’t quite scream 1960. Part shtick, all homage, the premise of Bambi Kino is finally flawed. But for all that, this record is no less enjoyable. Bambi Kino’s musicianship and enthusiasm overcome such caveats in the end.
Reverberating: 8.3
Posted by Unknown at 11:58 AM