Sleigh Bells (from Hell): Or Overrated Monstrosities of 2010, pt. 1 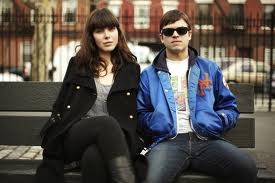 “Umm, Treats … bet ya I can eat just one”
Sleigh Bells. The guy in Pitchfork gave it an 8.7, and metacritic.com, an aggregator of reviews, suggests “Universal Acclaim,” and indicates an average score of 87.
Consider this the con of the year. Sleigh Bells debut full-length Treats is aptly titled, save for the fact that this is penny candy sold as Chocolate gateau. Three bites and you have a sugar headache.  Sleigh Bells serve up mediocre songs combining lame, mid-tempo post-Dre beats borrowed from Nineties hip-hop (and not especially good Nineties hip-hop) with bland distorto-guitar crap and synth bleeps. Less ugly than what used to be called rap-metal, but just as stupid.
Back story: Some dude (Derek Miller, who was in a hardcore band called Poison the Well) runs into a girl at a Brooklyn coffee shop. Collaboration ensues. Miller cranks out generic, crap pop metal riffage (the cute trick being that it’s ultra-distorted) and Alexis Krauss chirp-chants about nothing much. Williamsburg fawns. Files and clips saturate the net. Sleigh Bells mania follows. Now I know why they call it viral.
Simple lyrics, I have no problem with. Bring’em on; I’m a child of Little Richard and the Ramones. But these songs cloy where they should captivate.  Alexis Krauss’s singing shoots for the post-My Bloody Valentine cool of Kirstin Gundred’s Dum Dum Girls, but she’s a one trick filly; every song features vocals with so much echo, delay, and reverb that the effect is sheer aural fatigue.
Critics are tripping all over themselves to tell us how novel Sleigh Bells are. Well, freakin’ nonsense. Loud ass guitars over dope(y) beats - That’s new! This is A.R.E. Weapons meets Chemical Brothers with sugary female vocals. Sometimes I hear Le Tigre with less interesting songs. Anybody remember Electroclash? Didn’t think so. Well, trust me, this crap is close.
It’s not just that Sleigh Bells is undoubtedly a flash in the pan one-joke band that galls me. It’s that they’re not very good even given that. Depressing especially is the herd mentality that prevails among easily duped, ahistorical rock “critics” who fawn at any half-ass hipster thesis that allows them to drop Santogold or M.I.A.’s name. It must be sad to live in fear of being odd man (or woman) out.
Go ahead. Enjoy your Treats kids. But brush your mind after each listening to prevent decay.
Reverberating: 4.4
originally appeared in the KC Free Press
Posted by Unknown at 12:28 PM 4 comments: