The Witches - A Haunted Person's Guide to the Witches

The Witches - A Haunted Person's Guide to the Witches (Alive)


Curse these Witches!
Okay, I’ve listened to their music in the past. Even have a disc or two in my library. But damn it, A Haunted Person’s Guide to the Witches is going to send me into collector’s hell to find their other (all out of print) releases. It’s that good. 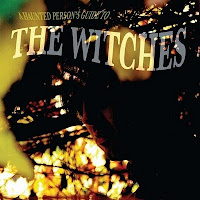 Most reviews of the Witches, not like there are millions or anything, are about two-thirds background. So, here I will take a deep breath and try to successfully provide some, and keep it to the essentials. The Witches have a floating roster, guitarists and songwriters Troy Gregory and John Nash being the consistent presences. Gregory’s resume reads like a somewhat confused alternative who’s who. He’s played with Flotsam and Jetsam. And Spiritualized. And the Swans. Perhaps his longest gig was with Mick Collins and the Dirtbombs; he played guitar with them on records like Dangerous Magical Noise and We Have You Surrounded. Nash has been around, too, his credits including the Electric Six. Among their collaborators in the Witches is Matthew Smith, the mind behind the always entertaining, sometimes amazing Outrageous Cherry. The Witches are the Detroit super-group (most of these sessions were cut in Jim Diamond’s Ghetto Recorders studio between 1995 and 2007) that no one knows about.
The music they make together is an amalgam of every cool Sixties sound. The opening guitar figure on “Everyone the Greatest” borrows beautifully from the Byrd’s (Gene Clark’s) “Never Before,” and that’s a sound snatched from the George Harrison’s Rickenbacker 12-string on “Hard Day’s Night.” By the time the track is over you’ve name-checked influences from the Velvet Underground to the Monkees. But the Witches blend them seamlessly into a decidedly Witches identity.
They strike a John Lee Hooker meets T.Rex (maybe Norman Greenbaum) boogie groove on “Down on Ugly Street” and “Attack of the Misfit Toyz.”  “Ugly Street” pleads “wont you abduct me,” the band’s druggy stream of consciousness lyrics backed by a biting guitar part that’s a dead ringer for Barry Melton’s sound on Country Joe and the Fish’s “Not So Sweet Martha Lorraine.” Oh yeah, Gregory and his gang have tons of tricks –“Attack” is a paranoid Stones’ fantasia in which you are implored to “drink your own blood.” Sure, the Witches have something of a, shall we say, an alternative reality fixation (pick that up from these song titles?). If I was knucklehead and this was 1971 – hey, I could call it ACID ROCK.
The Witches sound merges with Outrageous Cherry on the latter day Flamin' Groovies sounding “Lost With the Real Gone,” while “Who Wants 2 Sleep with the Birthday Girl” acquires a little Urge Overkill crunch to add to the Shake Some Action vintage harmonies.
Nuggets informed lysergic emanations are all over this music. You can hear the influence of bands like the 13th Floor Elevators and the Seeds on songs like “People What’s Wrong with U" (on which the Witches take someone to task for their indifference to ‘the secrets of the universe’ – Well, yeah!), and “The Haunted Regulars,” which also has a Stone’s ‘Dandelion”-vintage lurch.
The Witches share with the Brian Jonestown Massacre (at their best) a knack for mixing Stones and Velvet Underground rhythms, noticeably on tracks like “Spirit World Rising,” so drenched in the rock underground marinade of cosmic revelation and cheap beer. You can feel yourself parting the beaded curtains into a smoke filled room on “Sleepin' on a Demon’s Tree” (Roky-style demon-fascination, plus a psychedelic vibe that shares something with the band War on Drugs.). “Creepin’ Thru Yer Galaxy” concludes the A Haunted Person’s Guide to the Witches with some 12-string chime that’s pure Younger Than Yesterday Byrds, with a touch of Love’s classic debut record, and vocal harmonies simultaneously chaste and robust, steeped in reverb. It’s a reverie of the sounds that made L.A. groovy (and man, that’s been a while).
Less drone-obsessed than Spaceman 3, more focused than Primal Scream, the Witches share record collections with those bands, and similar visions. But while there’s nothing about the Witches music that screams Detroit in any classic or generic sense, I think it’s the rhythm ‘n’ blues foundations of Detroit musicianship that keep the Witches songs and sound comparatively grounded, even as they explore the outer dimensions. A Haunted Person’s Guide to the Witches is a top-notch introduction to an underrated band.
Reverberating: 8.9
Posted by Unknown at 6:43 PM No comments: