Welcome. I hope you caught my review last week in the Star and on Back To Rockville of the fine new Wire release "Red Barked Tree." This week 'Reverberations' shines its tiny spotlight on a most enjoyable piece of work from local hero Billy Belzer.

His new ep "You Shouldn't Have" is available as a download from bancamp.com (http://billybelzer.bandcamp.com/album/you-shouldnt-have). I suspect it may start showing up at selected local, indie record retailers soon, too. 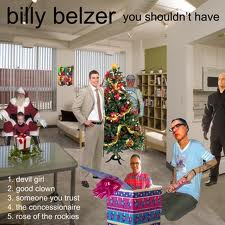 "Pop (power ... and not) masterwork from hometown lad."
Those who haunt the Kansas City music scene know Bill Belzer. They know him as one of the city's best drummers, whether it’s from his work (back in the day) with Mongol Beach Party or his recent playing with the New Amsterdams or his own bands Mary Fortune and the Sleazebeats. Bill played on my friend Todd Newman's pretty darn brilliant Temporary Setback. As a drummer Bill is rock solid; he can play in a variety of styles, he even knows how to let up on the 2 and 4 on the hi-hat to visit Charlie Watts town (something you can hardly get a young rock drummer to do). Beyond chops, he's always been a song conscious player. It was only a matter of time before he turned that superb song sense to writing his own material. Actually, he's done so for some time, but You Shouldn’t Have is the first release featuring Bill's songs, singing, and guitar playing as well as drumming. Wow, what took him so long? YSH borders on pop perfection, more because it pushes the boundaries of power-pop than adheres to them. Belzer's songs reflect his service with Mr. Newman as well as a studious absorption of writers like Nick Lowe, Elvis Costello, Marshall Crenshaw, and Matthew Sweet. Whether it's influence or affinity I also hear something in Belzer’s music that reminds me of Mac McCaughan's work with Portastatic.
YSH contains five songs, each distinct, characterized by wit, heart and brevity. Belzer has a concise sense of what makes a great pop song work and he demonstrates it with tunes that embrace a wide variety of moods, personae and tempi.
"Devil Girl," clocking in at a thrifty 2:14, is a corker. Framed by a nifty guitar lick, the lyric describes a wallflower who turns seductive and voluptuous in costume for an office Halloween party. Or as Belzer recounts: the girl "was chubby and lacked style and was very nervous. At the company Halloween party, however, she came dressed as an exceedingly sexy, well put together devil." There's a pregnant pause between the words devil and girl, a little hiccup that works beautifully both melodically and as a lyric conceit. Brisk, frisky and sweet, “Devil Girl” kicks things off beautifully.
"Good Clown" provides excellent personal and professional advice to a rock 'n' roll burnout. Belzer's subtle, half-whispered, sotto voce delivery makes his withering contempt darker, proving that restraint can be deadlier than excess. There's no vinegar in "Concessionaire," a song that Belzer describes being about gay romance and self-acceptance, but frankly it's universal ("What you have in your heart, is it anything to give it all away?"), being about the courage it takes to put your self on the line for love. Its setting is basically folk-rock with a touch of Big Star.
YSH concludes with "Rose of the Rockies," a heartbreakingly beautiful ballad. Belzer says it's "about a couple of friends I knew who had two incredible girls and whose marriage disintegrated." The casual listener might not catch all that; what anyone with a heart will hear is a beautiful song about longing and loss. It’s a conventional and annoying cliché that a given part (instrumental embellishment, for instance) 'makes' a song. My first thought always is that without a good song, nothing added to a song 'makes' it. That said, sometimes something in an arrangement can be so right, so affecting that it can amplify the soul of a song. Such is the case with Betse Ellis's violin work on "Rose of the Rockies;" her playing serves Belzer much like David Swarbrick's nuanced work complemented Sandy Denny's singing with Fairport Convention.
Five songs, right? And I've discussed four. Okay, it's tough. When an album has thirteen songs you don't feel compelled to discuss them all in a review. And honestly, "Someone You Trust" doesn't move me the way the other songs do. It's a fine song really, and it's positioned perfectly in the middle slot (3rd of 5 for you mathematically challenged ... like me), letting the more prepossessing songs stand out.
Belzer play drums, guitar and sings all lead vocals. In addition to Ms. Ellis, Belzer gets empathetic support from Jeff Freling (guitar, bass), Eric McCann (bass), Andrew Connor (bass), Mark Greenberg (keyboards), and Kristin May (backing vocals on 'Devil Girl'). YSH was engineered and mixed ably by Mike Nolte, Andrew Connor's band mate in Ghosty. Kudos to everyone - YSH is a practically flawless short program of power pop and balladry.
Reverberating: 8.8
Posted by Unknown at 8:42 PM No comments: