This a previous review of Reverberations No. 5 title ... 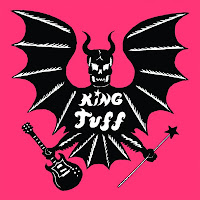 King Tuff’s self-titled sophomore release on Sub Pop is not what it appears to be. It appears to be some crude spoof on the stoner rock Kyle Thomas purveyed (w/ Jay Mascis on drums, no less) with the band Witch. On the cover a devil-bat wields what looks to be a Gibson SG in one claw and a five-pointed star wand in the other. Ooh – Wee – Ooh.


King Tuff’s debut record Was Dead, a mid-fi feast of sharp pop songs buried under de rigueur distortion, established an audience for Thomas’s trashed out recycling of classic rock moves. Was Dead got frequent, not unreasonable comparisons to similar works by garage like Ty Segall and Jay Reatard.


Of course with Melted and Watch Me Fall, Seagall and Reatard (respectively) made moves toward greater production clarity and songs bordering on pop-rock convention. With King Tuff, Thomas (with Magic Jake on bass and Kenny on drums) staggers past such peers, making a small rock ‘n’ roll masterpiece. This, of course, is bound to alienate some of the distortion is God crowd. Theirs’ are crocodile tears, really; this record sacrifices nothing whatsoever in energy or attitude.

Speaking of the Ramones, Thomas has Dee Dee Ramone’s deadpan ability to say what’s on his mind. The loser anthems on King Tuff make consistent reference to outsider status. On “Alone and Stoned” Thomas bluntly asserts that “all his friends” are just that. “Everywhere I Go I am a Stranger” laments “Stranger.” “Loser’s Wall” – okay, not a lot of explication required. For “Evergreen,” which bears more than a bit of resemblance to Deerhunter, Thomas presumes peace will find him “only when I die,” and sings with resignation that “I’m not really here.” A Bo Diddley throb is the foundation for “Unusual World’s” assertion of isolation and independence, the band sounding a little like the Sleepy Jackson. Get the picture? Yes, you see.


What prevents King Tuff from becoming a cartoon version of post-teen angst is the variety and deceptive depth of its music. At Detroit's Malcolm X Academy (nifty studio name), producer Bobby Harlow and Thomas crafted a rough, but sparkling diamond. The band is a classic rock magpie, and arrangement details abound; “Alone and Stoned” concludes with an acapella repeat of the song’s first line, capping off a satisfying T. Rex/Beach Boys hybrid. “Loser’s Wall” opens with chords borrowed from the Kinks’ “Till the End of the Day,” goes all “Jumpin’ Jack Flash” over the breaks, and Thomas’s vocal delivery is pure, laconic Thurston Moore. “Bad Thing” features close harmony vocals on the verse, transitioning to Daltrey screams on the chorus. “Loser’s” and “Bad” both have ingenious, beautifully developed guitar solos. Thomas is no slouch on the instrument he mythologizes (“when I play my Stratocaster”) on the latter song.


“Baby Just Break” is a neat mash-up of Buddy Holly and Bob Dylan derivations. “Now I’m a criminal” Thomas forlornly insists. But hey, he’s been preaching the alienated loser lifestyle throughout King Tuff – at least he’s consistent. The outsider ethic extends to the music business itself on “Stupid Superstar.” The lush, languid and majestic Big Star emulation of the performance is expressive, as the band decries bands that “don’t make art, but they play the part.” The ultimate message, of course, being that it’s better to be a loser than a fake.


King Tuff’s trump card is played with “Swamp of Love.” The title sounds like Cramps tribute; instead it’s a virtual banquet of Beatle elements. A raw testament to the glory and grit of love, “Swamp” is built on acoustic guitar and piano, building to a full band performance; then breaking down to a verse with just vocal and tremolo guitar, only to build back to a glorious finish, triggered by Kenny’s clear channeling of Ringo. Tucker’s Harrison-esque guitar lines are at once gnarly and gorgeous; his vocal has the lost wastrel quality of Johnny Thunders,  and the whole performance transcends homage.


King Tuff is the sound of a band feeling its oats. While it strays from the limits of a certain garage-punk production aesthetic, it resolutely confirms the genre’s oppositional attitude and hard rocking conviction.