The Greenhornes ... Better late than ... 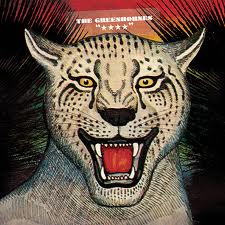 Jack White is a talented man, a rather overwhelming presence. Even at his most contained he sounds as excitable as Barney Fife singing Robert Johnson. I mean, he’s great, but think about it; he’s wound pretty tight.
But this is a review of the Greenhornes latest release ****, right? What’s the connection? Well, basically White appropriated the Greenhornes’ rhythm section - first, for his production of Loretta Lynn’s Van Lear Rose, then for two albums (and a few years) with the Raconteurs. Who could blame him? Jack Lawrence on bass and Patrick Keeler on drums are tremendous together. When the Greenhornes played the Scion Garage Festival in Lawrence this past October they put on a clinic in rock rhythm section performance. Hey, given their visibility in a prominent band like the Raconteurs, it takes a while to focus on the guy standing stage right – singer/guitarist Craig Fox.
Hell, he’s easy to overlook. He’s practically an anti-Jack. He doesn’t call attention to himself. On stage, he scarcely sways. His presence is purely an extension of the music. But he’s a supple, versatile singer, whose restraint is a good aesthetic call most of the time. Fox’s guitar playing is bluesy without reliance on tired clichés (In fact, his playing reminds me of that great line from Peter Laughner’s song “Cinderella Backstreet” - “play those blues, you learned from the English dudes” – as Yardbirds, Them, and Small Faces saturated as his playing is). Sonically, Fox uses distortion to power these songs, not overpower them. Finally, these tunes, while built on archetypal British invasion, freakbeat, and soul roots, are refreshing in their ability to embrace those archetypes without being consumed by them.
“Saying Goodbye” is a step-child of Who songs like “Armenia City in the Sky” and any number of Pretty Things ditties. “Underestimator” is based on the guitar syncopation that Dave Davies of the Kinks patented (and Pete Townshend leaned heavily on).
“Cave Drawings” goes in to Yardbirds (think ‘Happenings Ten Years Time Ago, especially the nifty guitar break) territory, It also flashes a little freakbeat style, as does “Jacob’s Ladder, a rebuke to a druggy debutante. “Song 13” pulls the Davies trick in the intro and breaks, but the remainder of the song could have been a Box Tops hit.
When their American inspirations show, they come from a variety of sources. “My Sparrow” could be a soul drippin’ rock take on the Louvin Brothers, while “Better Without It” and “Hard to Find” sound like something Dan Penn or Doug Sahm could have written.
American hard rock sounds permeate ‘Need Your Love,” a pounding, fuzz guitar propelled number that hits it and gets it in 2:33. While the band’s harmonies sweeten the attack, the sound is pure Detroit, somewhere between the MC5 and Frijid Pink (hey, the minor bands had their moments, too).
“Get Me Out of Here” sounds like something that would have fit snugly amid the rootsier songs on the Beatles “Abbey Road,” or something from Badfinger or Stealer’s Wheel.
Oh, and Jack White? He loves the Greenhornes. **** is on his label, Third Man Records. And he had a least a hand in producing the album. Given the band’s unassuming ways and the eight year (largely White precipitated) lag between records, **** demonstrates that sometimes slow and steady does win the race.
It’s an insinuating listen, varied stylistically, and the kind of record that wears very well after plenty of plays.
Reverberating: 8.7
Posted by Unknown at 1:44 PM No comments: