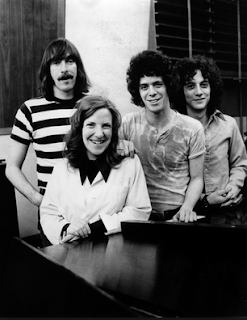 At last write I recalled my attachment to “I’m Set Free,” a track by Lou Reed on the third Velvet Underground (s/t) album.I failed to mention the guitar solo. It too arrested me, with its beautifully, pitch-warped authority.

Gradually, the whole album sunk in. ‘Murder Mystery’ baffled and amused me. "Pale Blue Eyes" a revelation. "Story of my Life,"  glowed with bittersweet acceptance. Each song an unraveling. “Beginning to See the Light” especially grabbed me … “I met myself in a dream, and I just wanna tell you everything was alright.” The conversational, grace note quality of his phrasing, cramming words while maintaining the tune, struck me. Little did I know then that this would be a set closer for a band I helped conjure a few years hence called Thumbs.
pictured: The Sunshine Company (ha, ha!)

Here, we dive into personal revelation and exposition, perhaps of no interest to someone who just wants to hear about Lou Reed. But it will be in the nature of these posts to move back and forth between worship and wreckage, reverie to reevaluation, the focus shifting from Lou, to me, to the culture in which we both endured.

By my senior year in high school I was differentiating myself. I was the kind of kid who befriended anyone who was welcoming, smart and/or funny. I didn’t care what tribe you came from, what race you were, nothing of the kind. But in 1969 the ‘respectable’ kids and jocks would ostracize you if you started befriending ‘freaks.’ At first I was just dumbfounded, nonplussed by such bullshit. Then it made me mad. As much as I enjoyed my freak friends I wasn’t interested in signing any contracts. But damned if the straights kids’ intolerance didn’t make my decisions for me. Make me a freak – fuck you, I'll be a freak. But like the Velvets, a band that never fit into the hippie paradigm, and abhorred the West Coast acidsunshinedayglohappyfreakout, I felt like I came from an earlier bohemian world, looking askance at the kids frolicking in the aquarian expectation - loving them, and shaking my head.

Then there was this girl. It’s a long story, but here’s the short version. After being stymied by shyness and doubt for years, I finally found a girl I wanted to date in my senior year of high school - enough to actually ASK her. I fell in love; I think she loved me too, but I know she wasn’t as consumed as I was. Anyway, she goes away to college while I stay in Lawrence at KU (like I had the money to imagine otherwise). Our love begins in winter, grows through spring and summer, endures for the better part of a long distance fall semester, then she dumps me and breaks my heart.

Who knows, maybe I had it coming. Who was that guy? I look back on him with recognition and incomprehension, affection and bewilderment. Is that how memory lives, works?

I had never been a drinker in high school. A beer or two once in a while. I might have gotten drunk once or twice. We’ll skirt the subject of my emerging drug history, but let’s just say that as the dejected lover I plunged into a brave new world of cheap wine. An immersion it takes a lifetime to assimilate, to make peace with, or eliminate and move on.

Three records were the soundtrack for my freshman year, second semester, into the summer and well ... since. One had been out for a full year, the early 1970 release of The MC5’s Back in the USA. It was joined by February 1971’s Love it to Death Alice Cooper, and November 1970’s Loaded by the Velvet Underground. And it was Loaded that I played more than any record for the next year or so.

Compared to White Light White Heat it was pop, fuck  - by comparison to WLWH it was country-rock. A failed attempt at making the Velvet's palatable to radio and wider audience, it was also a beautiful, melancholy capstone to a great band's career. Lou Reed and company had made the Manhattan equivalent of a Beach Boys record with Loaded. “Who Loves the Sun," a pop hit in an alternate universe, with its Randy Newman-like mix of lyrical lamentation and sunny sound kicks the album off. Doug Yule is the singer, as he is on three other of the album's ten tunes. And those performances are part of the beloved fabric of Loaded. Although, guitarist Sterling Morrison contended it would be a better record with Lou's lead vocals throughout. The original sleeve distributes songwriting credits to the band, since corrected - however much Yule contributed, these are unmistakably Lou's writing.

And the first time I heard “Sweet Jane” I didn’t know it would be the one song that traveled with me everywhere. I have sung it so many times with bands, and heard so many other versions of it that it has attained the elastic status of a standard. But when I go back to the original performance I am struck by the in the pocket ease of the band, the relaxation of the performance.

These albums (with bit of Plastic Ono Band and in April '71, Sticky Fingers), especially Loaded, were part of the after school, between school and work, downtime hanging with friends - soundtrack of eighteen and nineteen. We thought we were clever to figure out the ambiguous mix of doo-wop homage and parody in a line like, ‘as I walk down life’s lonely highways, hand in hand with myself,” from “I Found a Reason.” And “Rock and Roll” suited my emerging sense of self. Faced with the draft, the vagaries of picking a career (“then they expect you to pick a career” – “Working Class Hero,” John Lennon), and living hand to mouth, I was already finding a sustenance, resonance and home in the music that I wasn’t finding anywhere else. And that's why Reverberations borrows from Lou for its credo (i.e. "My life was saved by rock 'n' roll").

Of course all this time I was doubling back to the first album, Velvet Underground and Nico, which by this time sounded both dangerous and familiar, not yet realizing that for me, like hundreds of young musicians, an entire sensibility, a musical template was being established.

But more about that as we move along.

So thank you Lou (Mo, Sterling, Doug ...Adrian, Geoff, Billy).  For spring afternoons. nights of cheap wine discoveries, good friends, bonding over outsider blues. Oh, and of course for helping chart part of my own musical course.  We have many more stories to tell, and shall.