Reverberations Countdown at No. 3 with the Manic Street Preachers

Okay then, my number 3 record is one that hasn't even been distributed in the United States to date. Like about half of their recordings, Postcards From a Young Man, by the Manic Street Preachers, is mostly brilliant. And the other half of their catalog isn't too bad either. They have qualities that alienate the average American alternative rock fan (James Dean Bradfield's immodestly soaring tenor and guitar heroics, Nicky Wire's ambitious, sometimes over-reaching, agit-pop poetics), but I think the Manics are one of the best five bands of the last twenty years. 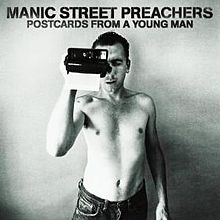 “A great rock band from Wales, still virtually unknown in America”
A popular and respected act around the world, especially in their native Britain, the Manic Street Preachers from Blackwood, Wales remain a cult band in the States. Their ambitions are too grand and their music too immodest for the tastemakers who set the boundaries of the American underground. Still, all but one of their nine previous albums has secured an American release (2004’s Lifeblood being an exception). The U.S. release of their tenth album Postcards From a Young Man isn’t imminent. Too bad, it’s among their best.
The central fact of the Manics’ career is the disappearance and presumed suicide of Richey Edwards after completing sessions for the band’s third album, The Holy Bible (1995). Bible was a scabrous thing. The lyrics by Edwards and bassist Nicky Wire explored every manner of human folly, barbarism and degradation; they made Joy Division sound like Air Supply. The music was a curious mix of guilty (given the lyrics) pop pleasures and pulverizing rock, a sound that mixed punk and arena rock in a seamless, authoritative way.
Brutal thing it was, The Holy Bible was Edward’s last will and testament. After the album’s release and Edward’s disappearance the Manics soldiered on as a trio, becoming hit makers in the U.K with their fourth record Everything Must Go and its’ generational anthem “A Design for Life.” Everything Must Go (1996) combined rock with a grandiose pop sound. The latter has occasionally overwhelmed the Manics. On albums like This is My Truth, Tell Me Yours (1998) and especially Lifeblood the Manics’ forgot to rock and turned out schmaltz that even Wire’s situationist/Marxist lyrics couldn’t overcome.
The band’s eighth album Send Away the Tigers (2007) struck a fine balance between their classic rock and punk tendencies. Then came A Journal for Plague Lovers in 2009, an album of blistering pop brilliance that was more vital than anything one might have anticipated from a twenty year old band, especially one set for early self-destruction (between Edward’s abuse issues and Wire’s statements about going out in a blaze of young glory). The songs for Journal were based on lyrics that Richey Edwards had left behind. Guitarist James Dean Bradfield and Sean Moore (the band’s consistently powerful, musical drummer) came up with arresting tunes and arrangements and the band’s power was captured by Steve Albini’s verite production methods.
The Manic Street Preachers continue to ride the wave that Tigers began and Journal accelerated. Postcards from a Young Man is a big, swaggering record, full of strong melodies and some of Wire’s best lyrics. The band employs string arrangements on several tracks and a vocal chorus on four songs, but the performances on Postcards From a Young Man are never overwhelmed by such augmentation. The Manic Street Preachers are such a confident, cohesive unit by now that they rock with a punch that can withstand production that would be top-heavy for lesser bands.
Bradfield’s tenor is a remarkable instrument, capable of tremendous tenderness and venom alike, but ultimately too Freddie Mercury for Animal Collective fans. As a guitarist Bradfield is brilliant, but he’s an old school, flash guitar hero. His playing is a cross between Mick Jones, Mick Ronson, Slash, and Eric Clapton at his long gone, most rock incendiary.  His solo on “The Descent (Pages 1 & 2) is beautifully composed. His Mick Ronson-esque licks drive “Auto-Intoxication.” He covers territory from Brian May to Thin Lizzy to Johnny Thunders, all in one song on “A Billion Balconies Facing the Sun,” and melds Lou Reed with Bruce Springsteen (“Badlands, particularly) on “All We Make is Entertainment,” which also features Wire’s brilliantly self-castigating lyrics – words that the song’s passionate performance only subverts.
The Manics’ diverse sensibilities are represented by their choice of musical guests on Postcards, incorporating contributions from a British post-punk icon, a Godfather of the punk underground and a strutting American rock star. “Some Kind of Nothingness” features guest vocals from Echo and the Bunnymen’s Ian McCulloch and interpolates bits of Echo’s “Never Stop.” “Auto-Intoxication” includes keyboard and “noise” performances from John Cale. Duff McKagan (Guns n’Roses/Velvet Revolver) plays bass on “A Billion Balconies Facing the Sun.” Impressionable working class lads from a wee town in south Wales, the Manics embraced each of these disparate characters as heroes.
Wire still converses with Richey Edwards’ ghost on the title track and “The Descent.” The revolution he once believed in seems like a cruel joke on songs like “Auto-Intoxication,” “A Billion Balconies Facing the Sun,” and “Don’t Be Evil,” as Wire stares into the present’s black holes of consumerism and alienation. Weary and disenchanted, Wire nonetheless continues to rage against the dying of the light, rather like another great Welshman Dylan Thomas. According to Wire and the band Postcards From a Young Man is a final Manics assault on the charts – a last ditch attempt to inoculate the world with disillusionment (thanks, Henry Miller). Wire is prone to wild pronouncements, though, so who knows. One senses, however, from the passion that drives Postcards that Wire and the Manics won’t be going gentle into that good night.
Reverberating; 9.2 (original), upgraded to 9.3
Posted by Unknown at 8:50 AM No comments: