Everyday I listen to music. And think about music. Today I was listening to the Real Kids, specifically their eponymous debut album on Red Star, a label started by Marty Thau. Marty was a good egg. Got to know him a little by correspondence toward the end of his life. Let's put it this way, he managed the New York Dolls and started a label that introduced the Real Kids and Suicide to the world outside the Northeastern United States. The fucking Sam Philips of St. Mark's Place, I tell ya.

That Real Kids album is a masterpiece. John Felice is a true believer in rock 'n' roll - as form, process and heart. His Real Kids were not exactly original. With every stud showing, you could see the materials from which they built their church. But it was in the mixing and personalizing of these materials that Felice and crew put their own stamp on the music they love. "All Kindsa Girls" - there are few better rock songs - a lot of Chuck Berry, a wad of Beatlegum, those heart tugging strains teased from Them's "Brown Eyed Girl" on the coda. Whether it was instinct or craft, it was surely inspiration, the inspiration of a kid (Felice) for whom Rock 'n' Roll was a way of life, not just an entertainment.

"Reggae Reggae" gives Felice a second opportunity on the record to diss homosexuals ("she thinks I'm a fag") to complement "the guys are all faggots" from "Do the Boob." So, no - political awareness wasn't John's strong suit. Appalling? Sure. But in the context of Boston-rock in the Seventies not to be wholly unanticipated from a working class Italian kid with fucked up teeth. The guitar sounds on "Reggae Reggae" are so great you just don't care, anyway. A weaving groove of Velvets (think "Foggy Notion") and Paul Revere (early, garage-y), the track is powered by drummer Howie Ferguson's uncanny, unconscious blend of Mo and Ringo. It's tribal, a clarion hip-shaker. The lyrics are ridiculous. What the fuck does it have to do with the Jamaican musical idiom, reggae? Fuck-all as far as I can tell. Apparently it's a - dance? But ultimately it's about drive and thrust, and the 'text' don't mean shit. When the words ("Reggae Reggae") are sung with such exhilaration it sounds revolutionary, just because joy and release always sound like liberation.

Oh, I was listening to The Magic Whip, Blur's reunion album. Am I wrong or is Britt Daniel

Have a great tomorrow.
Posted by Unknown at 8:41 PM 1 comment:

Reverberations' Picks for Best of 2014, Blurt magazine and Blurt online 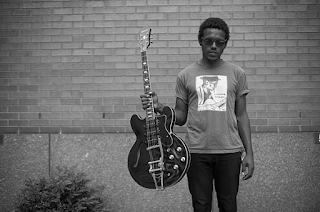 Well, well, well - It's been a long time. Maybe someday we'll talk about the reasons for the hiatus.
Or not.

Anyway, I did get off the couch long enough to muster up a top 10 for my friend Fred Mills at Blurt to kiss 2014 goodbye. A link to my list, and everyone else's, is immediately below.

And further below that is my part of the "Writer's Revenge" feature excerpted for your quick digestion.

These are all good records. I don't regret my choices. But I probably do regret not including some other titles, chiefly the Reigning Sound's Shattered. I love that band. It's a great record. I was clearly in a fog.

Sloan – Commonwealth (Yep Roc) Their eleventh album finds the Canadian quartet giving a “side” to each of the four musicians. While their individual proclivities and qualities emerge, it’s clearly Sloan – the best pop band in the world (since Super Furry Animals, who contested the crown, are no more).

Felice Brothers – Favorite Waitress (Dualtone) The studious, earnest “New Basement Tapes” have their moments, but the Felices are closer to the loose, ragged spirit of the original “Basement Tapes,” and a lot more fun.

Ex-hex – Rips (Merge) From Helium’s density, to Wild Flag’s super-woman jam rock to this – Mary Timony’s new band delivers a straight up pop-punk album. Just when Timony’s vocals start to sound a little too Smith College she flashes signs of Patti Smith inspiration, and her Thunders-esque guitar, plus the drumming of Laura Harris, keeps the music rocking.

Parquet Courts – Sunbathing Animal (What’s Your Rupture) Pavement – blah, blah, blah. But Parquet Courts reflect the Monochrome Set, Richard Hell, and the Embarrassment, too. On this, their deepest and rangiest album, Parquet Courts rock dirtier, harder and more driven than Malkmus and company ever did.

Lykke Li – I Never Learn (LL/Atlantic) Lykke Li follows her breakthrough,Wounded Rhymes, with a record, despite a few pop moments, that is a slower, darker and more exposed set of songs. Like some Piaf for a new age, her songs of heartbreak and defiance thrill and charm.

Ty Segall – Manipulator (Drag City) Ty Segall, a modern garage-pop Bach, is often too prolific for his own good. Manipulator, though, hits (mostly) on all cylinders and reveals many layers of the artist’s talents. Just enough hooks, just enough irreverent smack.

War on Drugs – Lost in the Dream (Secretly Canadian) Before I got lazy and preoccupied with life I wrote this for Blurt (but now I’m back!):http://blurtonline.com/review/war-drugs-lost-dream/

Real Kids – Shake … Outta Control (Ace of Hearts) It’s an admittedly sentimental pick. A little jerry-built, all studs showing – it won’t make anyone forget their iconic debut from 1977. But as his work with the Devotions demonstrated, Shake proves that John Felice is still rocking.

Archival/Reissues
Velvet Underground – s/t 45th Anniversary Deluxe edition. (Polydor) The Val Valentin mix, the mono mix, the “Closet Mix” (Lou’s vocals forward, instruments panned hard right and left) – all gathered together in one place. The quality of the two-discs of live material from the Matrix in San Francisco is remarkable; and so is the playing – loose, spirited, Lou and Sterling in guitar hero mode.