Welcome to the top 25 for 2010 Countdown! Each day we'll countdown, today we continue with number 8, culminating with our (okay, my) numero uno album of the year. When they're handy I'll borrow my earlier reviews from the KC Free Press. 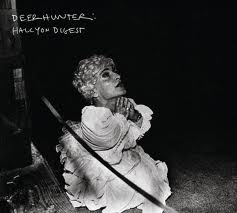 Bradford Cox has suggested that the inspiration for the title of Deerhunter’s beautiful new album Halcyon Digest was “the way we write and rewrite and edit our memories to be a digest version of what we want to remember, and how that’s kind of sad.” It’s his intense sense of the sadness of memory that drives Halcyon Digest. And it’s only reflective of a deeper, experiential melancholy; after all, what Cox describes is simply what human memory does. It’s Cox who locates the pathos in it.


Halcyon Digest is a culmination of the vision that Cox has built over the course of several Deerhunter releases and his solo work as Atlas Sound. That’s not to say that it isn’t a group effort. After all, two of the best songs on Digest are by guitarist Lockett Pundt. “Desire Lines,” at 6:42 and positioned as the closing track on a theoretical (on cd, anyway) side one, achieves a mesmerizing, repetitive density. Lundt’s shimmering guitar lines are equal parts Cure, Sonic Youth and kudzu-draped Strokes. The pensive lyrics (“what was once grace now undertows”) reinforce Cox’s marriage of the wistful and glum. Lundt’s ‘Fountain Stairs” allies a “Waiting for my Man” urgency to a more blithe vision (“when I look around I can feel it spinning, feet on the ground head on the ceiling”).

So, indeed – Deerhunter is very much a band. Yet, as the rest of Halcyon Digest demonstrates, Deerhunter is very much Bradford Cox’s band. Cox’s yearning captures the bland horrors at the core of the suburban dream, expressing defiance and rage in muted, stream of consciousness poetics. With empathy for a young lad doubtlessly like himself in “Don’t Cry” he suggest the boy’s “mansions are fading still,” and on “Revival” Cox uses a Bolan/Bowie guise and a modified Spector beat to illuminate “all these darkened hallways.”

There’s a voluntary isolation to the Lennon-like “Sailing.” “Memory Boy’s” chiming guitars and pounding (dig the propulsive double-time on the bridge) beat carry a reminiscence that alluedes to the departure of a hippie father. There’s an Everly Brothers-go-Twin Peaks unease about “Basement Scene,” as it captures that moment in youth when “I don’t want to get old” transforms into “I wanna get old.” ‘Helicopter” is harrowing, an elliptical answer to novelist Dennis Cooper’s grim saga of a young male sex slave. The song’s enveloping, almost Elizabethan charms make it both enchanting and haunted.

Cox turns up the heat on “Coronado,” an evocation of rejection and rage with a musical lineage that goes back to Diamond Dogs era David Bowie. Cox goes solo for the album’s closing track “He Would Have Laughed.” Dedicated to Jimmy Lee Lindsey Jr. (Jay Reatard), “Laughed” is a do not go silent epitaph about questions answered and unresolved - it’s also a one man band tour de force that evokes Lindsey’s work methods.

Deerhunter’s sound is derived from many sources – from the Clean to Stereolab, from Kraut-rock to Motown. Together, Cox and Lundt, with bassist Josh Fauver and drummer Moses Archuleta, have created a sound that’s dreamy and ambient, but powered by punk at the same time. Some of their songs are sheer pop pleasures; others drift in and out of your consciousness. Halcyon Digest is a near perfect expression of their art – a millennial time capsule full of lost youth, alienated affections and the dreams that remain.