Such is the case with our first covered release, 2012's number 10 record, Roman Roads IV=XI, from Land Observations. 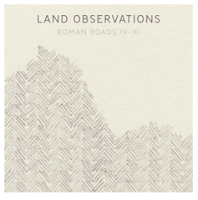