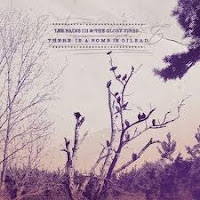 Produced by Bains and Lynn Bridges in Water Valley, Mississippi, Gilead was mixed by the Jim Dickinson of Detroit garage-rock, Jim Diamond, at his Ghetto Recorders. In this instance, the locales speak volumes. This is rock ‘n’ roll from the South, dirty and distinguished, polished (but not too much) to a Motor City shine. Fresh, soulful, assured, There is a Bomb in Gilead is a damn fine debut from Lee Bains III and the Glory Fires.