A tale of two singles with Gentleman Jesse and His Men 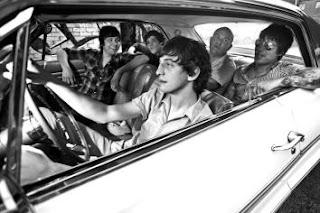 Gentleman Jesse and His Men -
(“She’s a Trap”/”I Won’t Say Goodbye” – Douchemaster & “You’ve Got the Wrong Man”/”Stubborn Ghost” – Hozac)
Last October a slew of bands loosely fitting the ‘garage-rock’ tag descended upon Lawrence for a one-day, multi-club event called “Garage Fest.” The first band I heard that evening was Atlanta’s Gentleman Jesse and His Men. It was among the best performances of the night. Jesse and his band offered pure pop pleasure that neither neglected nor exaggerated the power part of the ‘power-pop’ proposition. Their playing and singing was skilled, tight, convincing and miles apart from some folks' notion of what constitutes garage-rock, but for me it qualified. After all, the performers on Nuggets, the quintessential primer of the genre, were American bands who by and large imitated British rockers like the Kinks, Stones, Yardbirds and Them, but certainly among them (the Knickerbockers and Beau Brummels come quickly to mind)  were artists whose chief inspiration was the Beatles. The music of Gentleman Jesse is derived from those Beatle obsessed outfits from the mid-Sixties.
Jesse’s debut album, on the unfortunately named Douchemaster label, was a latter day power-pop treasure. Two recent singles, one on Douchemaster, the other on Chicago’s Hozac label, are the first new music from Jesse and His Men since that 2008 debut album. Between the two singles, four songs delivered in scarcely ten minutes, Jesse proves there’s plenty more in his bag of pop-rock tricks.
“She’s a Trap” is two minutes of pop nirvana, a cross between the pop side of “Nuggets” and the Undertones. Jesse’s vocals have a distinctly trans-Atlantic quality. He doesn’t sound particularly affected; it’s more that he betrays his influences without reservations, and some of those inspirations are British. Figure too, that between his Mick Jones-ish lead vocals and the Clash inspired harmonies on certain songs, Jesse and the band remind of American outfits like the Dils and Channel Three, bands whose pop-punk sounds were equal parts American and British. On the flip side, “I Won’t Say Goodbye” is a mid-tempo charmer that shows Jesse and His Men aren’t reliant on thrash-pop tempos (Jesse Smith also plays bass in Atlanta’s loud, fast punk band the Carbonas).
“You’ve Got the Wrong Man’s” bridge features the sort of compressed wordplay that Nick Lowe mastered so well on albums like Pure Pop for Now People and Labour of Lust.  The b-side “Stubborn Ghost” has a Lennonesque melody and busy, propulsive McCartney inspired bass lines. The spiffy twelve string figure that bridges each chorus and verse evokes the Rickenbacker sound featured on the Hard Day’s Night album.
None of these four songs are epochal or ground breaking. All of them are full of pop charm and performed exuberantly. As lovely filler between albums they are hard to fault, and any fan of power-pop would do well to seek out the singles, available from the Hozac and Douchemaster labels, as well as digitally from iTunes.
Reverberating: 8.7 (cumulative)
Posted by Unknown at 10:23 AM No comments: