The 2011 Countdown Continues with No. 16, Sonny and the Sunsets 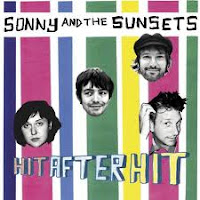 Here's a brand spankin' new look at Hit after Hit from Sonny Smith and the Sunsets (Fat Possum Records):
Sonny Smith writes songs. Lots of songs - by way of example, he wrote two-hundred for an art installation called 100 Records, all attributed to fictional artists, all deriving heavily from Fifties and Sixties pop, rock and rhythm ‘n’ blues sounds. His songs are flatly, frankly derivative, but with his retro-sensibility and easy, laconic vocal delivery he puts his own stamp on such idiomatic material. Nowhere is this exemplified better than on the new Sonny and the Sunsets release Hit after Hit.
Top 40-radio in the Sixties purveyed plenty of garbage, just as it does now. But not only was the overall quality of hit radio better in that halcyon era, but the sheer variety of styles and sounds was breathtaking. It’s hard for anyone younger than fifty-five to imagine a time when you might hear Count Five, the Who, Martha and the Vandellas and Buck Owens, all in one set, in between commercial breaks. Smith isn’t old enough to remember this himself. But he’s still nostalgic for it. Like many of his San Francisco garage-rock brethren he’s a rag picker, running a shop full of dusty treasures. Many of those peers assist on Hit after Hit, including John Dwyer from Thee Oh Sees and scene mainstay Kelley Stoltz, who plays drums on the album. It’s an insular, but cooperative crew, all of them somehow stuck on retro sounds, yet pushing the envelope of same.