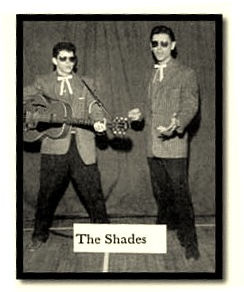 It was at a high school basketball game of all things.

The day I first laid eyes on the ‘peel slowly and see’ banana cover, designed by Andy Warhol, of the first Velvet Underground album.

An acquaintance was roaming the balcony of the Lawrence High School gymnasium, pausing occasionally to show his new acquisition to anyone who might be impressed.

This may sound strange. But I well remember walking the streets of downtown Lawrence with “Are You Experienced” under my arm, recently released, newly purchased, enjoying the commentary of friends and acquaintances who stopped me and asked me about this new artist and phenomenon named Jimi Hendrix. There was no world wide web, only a handful of rock magazines and underground newspapers spreading this subterranean culture to a few of us with our ear to the ground.

This acquaintance later become a friend. Then he was a year or so older. That’s a big deal when you’re fourteen.

He explained the whole drugs, whips, furs, demi-monde exceptional-ism of this new band, a teenage wasteland attempt to provide context.

I filed the information away, curious but anxious.

I heard White Light, White Heat somewhere, some other avant-friend's house. "Sister Ray" freaked me out to tell you the truth. Intrigued, unsettled by what I heard; I was fifteen.

Then I saw the third album, the self-titled record, in the bins of a local record shop. I couldn’t leave the store without it for some reason. That shop is long gone. But that music plays so very often, not just from my computer, stereo and car speakers, but also in the jukebox of my mind.

The first song that sunk in was “I’m Set Free.” The jangle reminded me of the Byrds. The lyrics were a quiet rapture and revelation. The chorus was rousing and dour. And in summation: “I’m set free to find a new illusion.” Words that would raise my spirits and trigger some sadly absurd sense of life’s cycles and shortages … over and over again.

1st in a series of Lewis Allan Reed memories and rhapsodies.
Posted by Unknown at 12:12 PM 2 comments:

blurtonline.com just posted a feature I did for them on King Khan and the Shrines. Soon to be included in the print edition, No. 14.

http://blurtonline.com/feature/spiritual-salvation-king-khan-shrines/
Posted by Unknown at 6:56 PM No comments: