Howler - America Give Up (Rough Trade) 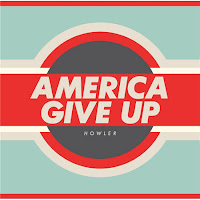 Howler sounds a little – okay, a lot – like the Strokes. And the Strokes sounded like late period Velvet Underground mixed with a roughhewn take on Television. I got news for ya; this is how influence works. Bands cut their teeth on other bands. Strangely enough, they resemble those bands. But if a band exerts too much influence or sustains too much popularity this makes hipsters uncomfortable, so they tend not to like bands that betray such influences. Oh, you know, it all makes the music too common for them. Fine and dandy – until you realize that it was the same mentality that consigned the Beatle embracing Big Star to the margins while the so-called underground celebrated Jethro Tull  and Yes. Dumb, dumb, dumb. 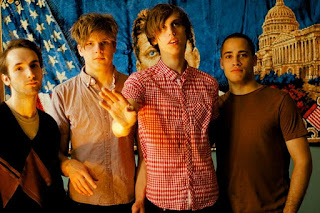 On their Rough Trade debut America Give Up Minneapolis’s Howler go with their Is This It inspiration and personalize it with salacious aplomb. Nineteen year-old singer Jordan Gatesmith shifts personae, engaging an Iggy –informed aggression, Julian Casablancas’s slur-shout, Jim Reid’s behind the beat croon, and Bradford Cox’s sleepy drawl. Guitarist Ian Nygaard has the Valensi-Hammond, Reid Brothers, and Johnny Ramone style sheet under control. Kids are pretty deft.
Aged between nineteen and twenty-four, Howler isn’t knocking you over with fully realized genius. But that’s not really the point. Even the insouciant supernova that was the Fab Four took two years to get to Rubber Soul, three to Revolver (okay, that was pretty amazing). But the point is – enjoy what these kids have done already instead of anticipating either the full flowering of their artistic glory or the dull repetition of formula. Get Zen, baby, live in the moment. And at this moment Howler have assembled a thirty-two minute collection of short, sharp, rockin’ tunes.
Their inspirations, beyond the obvious Strokes similarities, include the Jesus and Mary Chain (really pronounced on “Back to the Grave” and “Too Much Blood”), Sonic Youth in certain (a)tonalities, Deerhunter, and a dash of “old school” that reflects Echo and the Bunnymen’s mythic mock-pomp-pop. Throw in a little Stooges anima, really strong on “Pythagorean Theorem,” which also features a nifty stripped-down break with guitars that suggest a Gun Club or Cramps record lurking on the band’s IPod, and you've got the basic picture.
“America” is a weird little parable with references to shotgun weddings and John Wayne, and a “my darling, it’s all over now” refrain that seems to speak directly to the subject of the song. “Told You Once” kicks off with a hard acoustic rhythm, evoking Dramarama’s “The Next Time” and bringing the Beach Boys harmonies. “Back of Your Neck” is a hipster teen slice of life with Cars-styled stop-start rhythms and a guitar break straight out of the Plugz’ acid-surf guitar music on the Repo Man soundtrack.
Read more »
Posted by Unknown at 9:10 PM 2 comments: