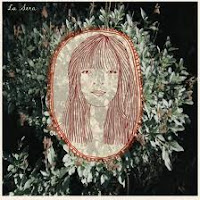 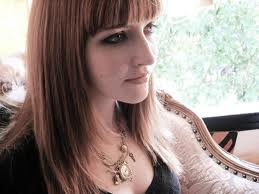 Katy Goodman played bass with the Vivian Girls.  Her new band La Sera (their debut is self-titled) is a collaboration with multi-instrumentalist and producer Brady Hall, which tones down the VG’s noise-gunk pop and emphasizes melody and more sophisticated arrangement textures. There’ still a patina of distortion, but it is soft focus rather than spread thick. Goodman has some of the same girl group influences that every third band recording today (Dum Dum Girls, Frankie Rose and the Outs, Hunx & His Punx, blah blah blah) seems to have, but in truth many of her inspirations pre and post-date those Sixties sounds.  You can hear the gossamer Fifties pop vocals of the McGuire Sisters and the Chordettes in Goodman’s singing, only processed through successive generations of Jesus and Mary Chain and Enya influences. Go ahead, laugh; Enya was really popular – somebody listened to those sweet, amniotic, singing-with-myself harmonies. Elvis loved Dean Martin. Get over it.
The lyrics are hard to decipher sometimes, given the mixes that predominate on La Sera; dig a little harder and underneath the sweet, soothing singing are songs about heartache and death. They sure are pretty, though, it’s an intriguing form/content mismatch that works. Goodman’s pretty one-woman girl group vocals are the center of this recording, but they certainly profit from Brad Hall’s uncannily appropriate instrumental backings. Supposedly, he heard Goodman’s own guitar and tambourine demos of these songs and decided to trick them out, recording Goodman’s vocals afterward.
Hall’s guitar work ranges from Reid Brothers rough to guitar solos that combine Carl Wilson’s tone with George Harrison’s melodicicsm. Tracks like ‘You’re Going to Cry” and “Under the Tree” are reminiscent of David Roback’s work with Mazzy Star. Hall’s also a terrific bass player; his lines are subtle, melodic and propulsive in the right places, especially on the Paisley Underground tinged “Hold.” The prom balladry of “Dove Into Love” fuses the Smith and the Ramones sonically. “Been Here Before” chugs along like an old Kinks track and features an oh-so Johnny Marr-ish solo from Hall.
Okay, I’m making it sound like Hall’s record. And in some ways it is. But the tunes (and the demos) and the vocals are Goodman’s, and finally it’s her vision. It reflects a generation spanning (from Fifties female pop singers up through the Ramones, Smiths, and Jesus and Mary Chain) sound and an aesthetic of sweet, sometimes doomed, romanticism that represents a lovely Liebestraume for a new century.