Black Angels - Phosphene Dream is Reverberations No. 1 for 2010!

Welcome to the top 25 for 2010 Countdown! Each day we'll countdown; today we culminate with our (okay, my) Number One album of the year. This review first appeared in the KC Free Press.

When this release was announced I hadn't the highest hopes. I'd found the sound of the Black Angels earlier records impressive, but the songwriting was mediocre. The songs on Phosphene Dream don't necessarily compare to the best work of their inspirations (Beatles, Doors, Velvets, Elevators, etc.), but they're good, and good enough that taken as a body of work they impress with their craft, consistency, and vision.  Producer Dave Sardy, whose credits read like a name check of alternative rock artists, undoubtedly tightened up the band's arrangements. And having signed to Blue Horizon, the new (actually revived) imprint from Sire's Seymour Stein and famed producer Richard Gottehrer, the Black Angels were ready to make a RECORD, not just a recording. Phosphene Dream is just that a RECORD, an album that coheres from start to finish. Like all great records it's comprised of good songs that cumulatively comprise an even greater work.

Critics seem bent on celebrating Arcade Fire's The Suburbs. Hey, I'm not a hater, but for me the Black Angels vision of what happens when the kids leave the suburbs and move into a college town crash pad with a bunch of questionable characters is just more compelling. 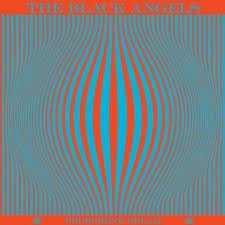 Naming themselves after the most stridently dissonant song from the
Velvet Underground and Nico album, the Black Angels pledged themselves to menace and drone. They pursued it with vigor and fury on their previous records, sometimes giving too much of a good thing. Their new album Phosphene Dream features shorter, more succinct songs and more detailedperformances without sacrificing any of the band’s maniacal intensity. I think it’s the best distillation to date of their dope-deal-gone-bad and love at the edge visions.


Phosphene Dream is the first release for Seymour Stein and Richard Gottehrer’s revived Blue Horizon imprint. It’s an interesting and complicated saga, perhaps best accounted in my friend Mark Cope’s article (http://www.examiner.com/music-industry-in-national/the-blue-horizon-records-label-is-reactivated-by-the-orchard-and-the-warner-music-group). With that legacy, however convoluted, Phosphene
had to be good. And it is.

“Bad Vibrations” kicks things off in fine fashion, the Angel’s debts to the 13th Floor Elevators and Spaceman 3 quickly in evidence. Amid a swirl of tremolo and Vox Continental organ emanations singer Alex Maas proffers one of the band’s customary tales of lust, love, confusion and destruction’s eve. The Angels are Austinites, but much of Phosphene Dream is suggestive of the curdling of the California dream, a sort of the edge/end of the world sensibility saturates the album.

“Haunting at 1300 McKinley” sounds like the Mamas and Papas if the Elevators had kicked Lou Alder out of the studio and let the acid flow. Echoes of Sixties classics permeate Phosphene Dream, from the “Season of the Witch” rhythms of “Yellow Elevator # 2” to the “Born the Be Wild” kick start of “River of Blood.” The former takes the Moody Blues on a terror ride up Cielo Drive; the latter echoes such Sixties acid-pop as Bubble Puppy and Southwest F.O.B. (their regional hit “Smell of Incense” sounds like a model for “River.”)

“Entrance Song’s” mutated Hooker boogie delivers a post-apocalyptic take on Chuck Berry’s driving songs, combining the druggy drive of Hawkwind and Blue Oyster Cult into one seductive whole. “Telephone” sounds like a one-off jam between the Yardbirds and Velvets with Paul McCartney in the vocal booth.

Alex Maas has matured as a singer. He’s sorted out that there’s as much terror lurking in the quiet as the maelstrom. Stephanie Bailey’s drumming powers the band like a cross between Mo Tucker and Nick Mason. Multi-instrumentalist Christian Bland is responsible for the album’s graphic package, a psychedelic and blood red metaphor for the music inside.

The Black Angels are a brutally honed doom rock machine, each member contributing on several instruments and chipping in on vocals.The band’s hippie nihilism gets a little thick, but Phosphene Dream kicks butt. It’s a bad trip you just can’t resist.

Say this, the Black Angels stick to their aesthetic guns. And this time out I’m a willing hostage.