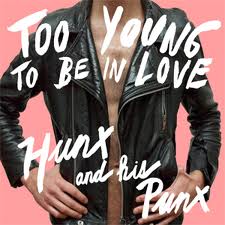 At Kief’s in the late Seventies we had this regular customer named Reza who bought tons of dance records – club remixes on twelve-inch, that sort of stuff. We got used to anticipating his visits and would point out new arrivals in the idiom when he came to the store. One day he arrived; there we were all poised to show him the latest cool dance mix. With a dismissive wave of the hand he said “no more disco, new wave.” Thus converted, Reza began buying everything he could get his hands on that screamed 100 Club and CBGB’s.
Perhaps Seth Bogart had such a conversion experience. The shift from Gravy Train’s charged homoerotic electro-anthems to the girl group-punk of Hunx and his Punx seems pronounced. Or is it? The puke-pink cover and the torso shot of some hunk (Hunx?) in Freddie Mercury leather suggest that it’s all just the same party with a new soundtrack, as does the stylized shot of bassist Shannon Shaw on the disc itself – pure John Waters after Andy Warhol. And to be sure, there’s an decided element of classic camp involved with both bands. Still, sonically Bogart’s definitely moved from Le Tigre territory to Black Lips go Shangri-La’s turf. 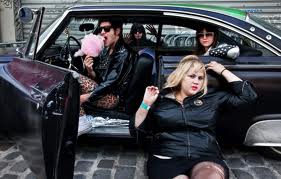 The responsoria of the Punx are central to the “is (s) he really going out with him?” affect of Too Young to Be in Love (sassy vocal retorts and echoes to Bogart’s declarations); the Punx are in fact Punxettes, if you will, who complete Hunx’s girl-group fantasia. Shaw on bass, Erin Emslie on drums, Michelle Santamaria on lead guitar and Amy Blandstein on guitar and organ blast out the somewhat generic, yet convincing cross between jangle-pop and the Ramones that supports the idiomatic, but charming tunes on Too Young.
Bogart co-writes and sings most of the material. While he gets the songs across, he’s not a pre-possessing vocal talent. His approach will be familiar to fans of the Black Lips or the late Jay Reatard  – nonchalant, pitchy, mock-earnest. There was something in Reatard’s work, though, that suggested a poetic dimension and emotional depth that Bogart simply skirts in favor of fun, fun, fun. It doesn’t diminish the enjoyment of Too Young, but it does diminish the band's potential for what the British press used to call ‘staying power.” The band’s performances are captured nicely by producer Ivan Julian (guitarist with Richard Hell, Matthew Sweet, etc.). His production keeps things focused, simple and direct – basically the record sounds like a polished up version of a live show, which is spot-on for this material.
“Lover’s Lane” sets the tone for Too Young to Be in Love from note one. Basically ‘Last Kiss’ without the narrative specificity, “Lane” establishes Bogart as the new Lance Loud. While victim themes prevail here, “Keep Away From Johnny” is self-assertion set to a surf-Ramones backbeat. The title song proves that camp loves doom, Bogart slipping into recitative mode. “If You’re Not There” offers a change of pace, loping along like something Dave Edmunds might have cooked up. “Tonite Tonite” traffics in the ubiquitous Spector-beat thump, punk style. You’ve heard it all before, I suppose, but it’s fun to hear it again.
If my enthusiasm for Too Young is real, it’s not complete or unqualified. It’s wholly entertaining stuff, and best consumed with a feast of friends and a few tall ones. To matter after the hangover, Bogart is going to have to find some little something, something that makes his delivery and his songs stand out. Too Young to Be in Love is good enough to keep me interested and facile enough to bait my breath.
Reverberating: 7.7
Posted by Unknown at 12:10 PM No comments: