Welcome to the top 25 for 2010 Countdown! Each day we'll countdown, today we continue with number 10, culminating with our (okay, my) numero uno album of the year. When they're handy I'll borrow my earlier reviews from the KC Free Press. Sometimes, I'll need a new review (or revised, actually, from the "R" blog) like this one! 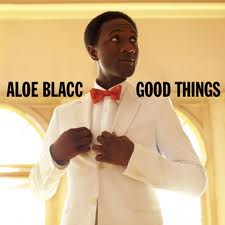 Panamanian born Aloe Blacc brings the skills he developed as a rapper (a decade in the hip-hop duo Emanon) to his second record
as a neo/retro soul singer on the Stones Throw label, and the results are splendid. His vocal influences range from Marvin Gaye to Gil Scott-Heron, but over the course of Good Things Blacc asserts his own soul vision. He may not have the chops of Marvin, but he’s a soulful, supple singer whose hip-hop informed
phrasing gives him a clear identity.

Blacc’s songs honor his heritage while extending it. If the catchy, arresting
capitalist critique ‘I Need a Dollar’ isn’t an anthem for these times, I don’t
know what is. And “Life So Hard,” with its There’s a Riot Goin’ On vibe isn’t
far behind. Blacc shows his stylistic range with a knowing, nuanced take on
Lou Reed’s ‘Femme Fatale.’ His ‘Mama Hold My Hand’ echoes both Bill Withers
and 2Pac, while standing confidently in their esteemed company.

There’s a not so quiet revolution going on in contemporary rhythm ‘n’ blues.
Singers as diverse as Raphael Saadiq and Eli ‘Paperboy’ Reed, or Mayer
Hawthorne and John Legend are going to the well of classic soul and drawing
waters of melody, invention and humanity that are bringing a genre thirsting for real
human emotion back to life. Good Things absolutely lives up to its name; it’s a fresh,
original collection of songs from a singer-songwriter who understands that modern black
music has to look back in order to move ahead.