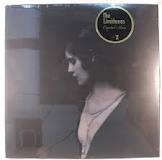 Lionel’s vintage guitar and organ sonorities are driven by Marie’s basic, insistent drumming, and blended with everything from ukulele (“Salvation”) and glockenspiel (“Longanisse”). It’s a palette both bone simple and subtly complex and the Liminanas know the difference between embellishment and excess.

You can hear the ghost  of “I Got You Babe”  on “Hospital Boogie,” while the instrumental “Belmondo” (a homage to new wave film star Jean Paul Belmondo) sounds like a mix of Syd Barrett’s (okay, early Pink Floyd) “Lucifer Sam” and the fictional soundtrack stars Max Frost and the Storm Troopers. “Betty and Johnny,” one of several songs sung in the band’s native tongue, has a guitar figure so derivative of Hilton Valentines’ three chord declaration on the Animals’ “We Got to Get Out of This Place” (itself a variation on Link Wray’s “Rumble”) that it might be a sample (but I think it’s played).